I have long preferred Italy's sleek train line, TrenoItalo or Italo Treno (depending on their web master's viewpoint) to Italy's Trenitalia FrecciaRossa service. I still stand by this rave review (below), although I *wish* they would add to their groovy announcements to shoo people away from the doorways when they come into the station. The smokers stand - even on the steps - to cop a quick smoke, making you walk through their disgusting nicotine haze just to find your seat.

Back in the day, I had given it the white glove treatment, and on the whole, it came out in flying colors, namely red, like the Ferrari it purports to be.  Only time will tell if it's the hullaboo of a big opening, or if their idea of putting service back into the train system will work [still going strong!]  We can monitor their five-star opening, and see if the star eventually falls out of the sky, piece by piece, like the Red Arrow before them, or see, unlike Trenitalia, they're able to keep up the promise of You deserve better when you travel. 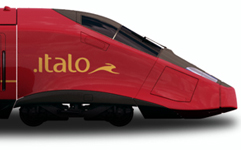 So, let's take my experience on the spanking new Italo train from the top:
Anyone who's lived in Italy knows that Italians love to have two wholly different brand names for any major thing -- like Fiumicino/Leonardo Da Vinci airport, or the Mona Lisa/La Giaconda.  I'm not sure where this practice started, perhaps with Popes taking new names when they became the Big Formaggio.  So with Italo Trains.  The website says Italo, the trains are called Italo, the trains, company and other communications shout out NTV (which always makes me think that they're competing with MTV - Music Television and not Trenitalia/Ferrovie dello Stato).
The website reaches near-nirvana, with its easy-on-the-eye graphics, fun things to see and do, pages that actually go where they say they will, and the ease of making a ticket purchase without having to have a PhD in deciphering hieroglyphics just to see your options.  I got two low-cost tickets for about 20 euro each to my destinations (Rome-Florence/Florence-Milan), half price on most fares.  The English website, while needing some touch-ups, is pretty much as good as it gets.
At the Rome Tiburtina railway station, a greeter welcomed us in the bowels of the station and sent us seekers of all good things to the lovely waiting room up in the piazza. Open to all travelers - not just those who have paid an annual Club Card fee.  Their friendly, informative staff helped all and sundry - and the best part was, dogs were welcome!  I would imagine that if we still had luggage carts, they would have allowed them in as well, unlike the competition.  Huge clocks right in the doorways made everyone's life easier as did the setup for laptops and recharge stations.

[A note about the new redesign of Rome's Tiburtina train station:  Someone finally made the connection, only after 160+ years, that people traveling by train actually carry luggage.  They have built RAMPS up to the platforms. Traveling with a huge bag, doggy bag, computer bag & and other sundry items, there are no words to express my gratitude.]
On board the train, it thankfully had none of the features of the miserable Eurostar.  Seats were comfortable, made for real people under 6ft 1", and bathrooms were clean (although, they are new).  I'll update this in a year's time. Internet on board was a work in progress, but at least you didn't need an internet connection, four aliases and a papal decree in order to log in and run it.
We arrived in Milan about 20 minutes behind schedule.  Which made me wonder about the NTV logo sporting a speedy hare.  After all, even Italians grow up with the fable of the tortoise and the hare...But, I've said it before and will say it again, Italy is nothing if not brand image-challenged.  Nonetheless, even if NTV did use a tortoise logo, I will look forward to never having to venture into a Trenitalia website nor on board a Trenitalia train again.  Now, if NTV could just open up in the USA, offering hey - MTV videos as well on board, life would be a dream.

Postscript:  While I love all the creature comforts, I pray that little by little they don't whittle down all these features as their TrenItalia brethren did.  Back in the day, we were offered a banquet of customer perks from private meeting rooms to welcome drinks and free luggage check; only to see them all removed, one by one, once the customers came on board.

Pictures of my train experience will be posted on my Burnt by the Tuscan Sun Facebook page.

can't wait to try it! good laugh all around

Leave it to the Italians to have a sleek, stylish train!! Love the practicality of the laptop recharge stations and greeter...makes travel so much more convenient!

After reading your blog entry, I got curious and went to the website. Amazing! Actually in English and you can book (including whether you want aisle or window) all online. I know I have been gone for 12 years, but what I remember doing was going to the station, and if you wanted to book a seat you had to go into the big hall, take a number and then buy your reservation. Obviously that may have changed since I left, but this website was fantastic. Sorry I do not have a train journey in Italy coming up.