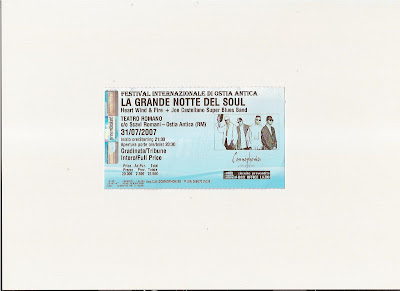 I am still filled with the joys and sounds of an amazing concert held in Rome’s Ancient Port of Ostia Antica, right in the ancient theatre, stone seats and all. The concert, entitled La Grande Notte del Soul (the grand night of soul) way exceeded my expectations: that’s because, by the time I actually sat down, my expectations had ebbed to such a low point, I had none left.
In fact, it was not until I heard the familiar beat of noneother than Earth, Wind & Fire, did I come to realize, that I had actually bought tickets to the show I truly had desired to see.
It started when I had seen the poster, noted the website, and logged on to purchase 4 tkts. I searched Earth, Wind, Fire, the date, Ostia, you name it. Nothing came up. And, as happens with most Italian inter-not experiences, minutes turned into hours, and still ‘Transaction incomplete’.
I then called the quick access number (never toll free, as the pre-recorded voice informs you at the other end), and after a few minutes there, I’m told to call back during opening hours (of course, down for the lunchtime hiatus when everyone with a PC and a credit card can actually conduct personal business). Eventually, I explained the problem, and, I soon discover I was to search using the word, Grande. Great. When finally, I successfully made my purchase, I noted that the concert was actually entitled Heart, Wind & Fire -- along with the Joe Castellano Blues Band. Now ensues a few more phone calls to the Info Line followed by emails to friends stating that we may, in fact, be attending an Italian soul group’s interpretation of the Earth Wind & Fire songs. Did anyone know if EWF was still around anymore? Such is life across the Atlantic. The cordial info line lady at the other end, had absolutely no opinion on the matter.
Next day, I decide to be a bit more proactive and reexamine the poster. I text a friend: ‘do you remember there being a bunch of white guys in EWF??’ ‘I have no idea, she texts back’. Grande.
On the way to the concert, I pull the tickets out of the envelope. They are labeled, Heart, Wind & Fire as are the last-minute informational posters around the entrance. I text my friends again. Some are starting to have second thoughts on coming at all, and these are Italians!
Why all the trepidation? Because, Italy is a place where you go to the highly touted ‘Caravaggio and his followers’ show, only to find one Caravaggio—and 99 followers. It’s where your frequent flyer programs cost money to join, where free give-aways are always accompanied by fine print saying how much money you need to give away in order to get something free.
Let’s just say, what many would consider ‘false advertising’ here, is more interpreted as ‘suggestive selling’.
And so, reluctantly, I take my seat to hear the Heart, Wind and Fire concert, my friends still on the way (the concert starts at 9:30 pm, and most were leaving the house at 9:20, they’re Italians after all).
They text me wildly, asking me to ask someone; because they weren’t coming all the way to Ostia Antica to hear a black Beatlemania.
So, I ask some of the people working there. Shoulder shrugs. I finally enlist a live debate on the matter with other attendees. The upshot: “well, the thought has also crossed our minds…but, we decided that it’s gotta be the real thing, because somewhere in the fine print, it would have said ‘cover’, so we’re crossing our fingers, too, that it’ll really be EWF.”
And it was. Although not the original band members, which, probably in their 60’s by now was comforting, but along with the cover show by the Joe Castellano band, it was truly a night to remember -- beneath a full moon, surrounded by columns topped with ancient masks, and boogying to ‘Let’s Groove Tonight’.
As for the Heart, well, we determined it was simply lost in translation; after all, Italians can’t pronounce ‘th’, and so, Earth becomes ‘Airt’, which, to the Italian typist, knowing that in English, you drop the ‘h’ sound, probably sounded a lot like Heart.

I had a great laugh at this, thank you! Reminded me of "famously misheard lyrics, such as Creedence Clearwater Revival - Bad Moon on the Rise (...bathroom on the right) (more of this under ; http://www.kink.fm/pages/131326.php?contentType=4&contentId=246609); all cheers from Berlin!

Very funny and also very familiar. It's nice though that it turned out positive this time...for all of the times that you don't get what you thought you were going to. That's what makes us keep trying, no?