Nowadays, I actually enjoy going back up to Milano, and noticing all the little improvements along the way—new store fronts, new bars, new faces, new art shows. The city seems more vibrant in some ways.
One thing I hadn’t noticed was the huge upgrade of the pedestrian mall they had created a few years back. I hadn’t noticed it, because I had by now gotten into the habit of taking a side street, bypassing all the cool shops. It was too painful. And I don’t mean just the prices.

Walking up that street, with its new inlaid granite blocks was terribly uncomfortable. Once again, the designers had a great-looking concept which, once put into practice, did not serve its intended purpose. The walkway, as it were, was so painful to actually set foot on, my dog would lunge himself into traffic (yes, you can always count on cars on Italy’s pedestrian malls) rather than face the stones.

And he wasn’t the only one to seek reprieve. There was a little 10 inch strip of flat marble running up the street on one side. And, in the first-ever documented case of Italians actually forming a single-file line, well, there we would be, like good 10 little Indians, marching up the block—all in a row. 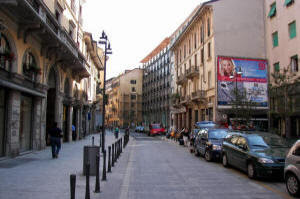 The situation was so horrible that finally, the residents (and the store owners, especially the ones who were losing a great deal of business on the side of the mall sans flat strip) started a campaign to get the marble blocks sanded down. They hung posters, little old ladies petitioned the City officials, shop owners protested. Before they had a chance to sit themselves down and block traffic from entering this no-traffic zone, well, the City actually brought in the sanders. At what cost, this do-over?

Incredibly, today I found on that same walkway, a Citizen’s Initiative truck run by the Milan newspaper group Corriere della Sera. They asked if anything could be improved in town and to write down my complaints.
Thinking they should perhaps take it up with the residents in the outskirts where the streets are hardly paved with marble, I took one look at my new smooth mall, and walked on by.

Thank goodness they fixed that! I remember trying to walk on that and practically broke my ankles. See, they can get together to produce a good outcome. Maybe they will start thinking better about combining form and function.