With record gas prices, inflation across Europe, a looming mortgage crisis, and no government, it would seem hard to find something positive in the horizon, but, never fear, the Italians are nothing if not enterprising people.

This month we applaud:

- Mr. Ferrero, the maker of that true ambrosia, Nutella, making the Forbes list as the richest man in Italy.
Now, if Forbes can just get at everyone else's hidden accounts in Lichtenstein, Switzerland and offshore hideaways, that list might truly be something to look at.


- The huge RAI TV antennas will no longer grace the Seven Hills of Rome.
Perhaps the enlightened (nonexistent) government will quit stalling on calls by pretty much everyone on earth to take down the ugly telephone lines draping the Tuscan countryside, this, too, would be a wonderful sight not to see. 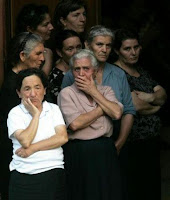 - Italian Pier Paolo Cito who won the Award for Excellence for his portrait photo, Le Donne di San Luca of Photographer of the Year.

- The Romans, in a study of tourists, were listed as “I più belli d’Europa".
So now you know why I live here – it’s eye candy that even Mr. Ferrero can’t conceive of.