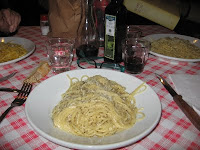 Wednesday may have been Prince spaghetti day, but, today is International Pasta Day! And, judging from the latest statistics, Americans are eating pasta even more than once a week. In sunny Rome, we had a beautiful day to celebrate, with all kinds of pastas being served in the shadow of Castel Sant’Angelo. Heck, they even had a kiddie area where they were making Colosseum replicas out of the boxes!

It seems everything’s happening in Bella Roma this fall: The Festival del Cinema, a Calder exhibit opening (can’t wait!), theatres filled with performances, even the Barnum & Bailey circus, museums at night…It’s no wonder that Rome was voted recently one of the most livable cities. I would totally agree, although there are those other studies which show for pollution, traffic, and, services (like no nursery schools)…it’s not so great. And, if you don’t count the hundreds each year who get run down on the crosswalks (they probably would have agreed, it was a great city in which to die, though)…I think those reports are spot on.

My friends called from Castel Sant’Angelo to tell me that the day was picture perfect, and the organization flawless. Of course, there were the curmudgeons who were wondering when they’d get fed their ‘secondo piatto’ (was it called International Roast Bif Day??!!)

But, a friend who went to the Dennis Hopper presentation of his new fab book of photos (at 500 euro a shot, it better be fab) had this to report: He was doing a book signing of sorts. Except that he was signing little slips of paper, promoting the book. There were no books on display, nor were they on offer. I wonder -- was that intentional (to avoid the embarrassment of him not signing any books since we’re in the throws of the Great Recession?) – or, were the books merely stuck in customs?

It's also St. Crispin's Day. It's when The British "Band of Brothers" beat the sh-t out of the French. One of the most famous battles in history. See if you can name it without googling it.

I would absolutely fail at Trivial Pursuit on anything pertaining to history - politics - sports - entertainment, so...sorry ! can't even attempt a guess.
But, I'm sure I'll know it when I hear it!

Francesca:
Fie and for shame! It's Shakespere's Henry V. His speech before his troops at the Battle of Agincourt. When you Google it under St. Crispin's Day, scroll down to the Youtube 2min 14 sec delivery by Sir Lawrence Oliver.

St. Crispin's Day was also the not so illustrious Battle of Balaclava (Charge of the Light Brigade). OTOH it is also celebrates the Battle of Leyte Gulf in WWII.

Get thee behind ye, Satan...