This past week, we saw the start of the famous bicycle race, Italy's Giro di Italia.  According to Wikipedia, the Giro di Italia is:


The Giro d'Italia (Tour of Italy), also simply known as The Giro, is a long distance road bicycle racing stage race for professional cyclists held over three weeks in May/early June in and around Italy. It is one of the three Grand Tours, and is part of the UCI World Ranking calendar.

And so, it came as a bit of a surprise, when we started seeing & hearing the results of the first leg of the race -- around Holland.  I could not, for the life of me, think of why the race was so off course -- visions of Mount Vesuvius erupting to put an ash cloud over the race popped into my head. 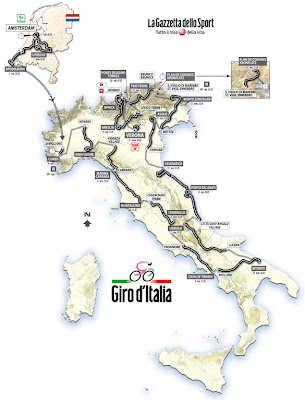 picture from http://www.steephill.tv/giro-d-italia/#route-map
Considering the Italians' fame for lack of organization, I got a big kick out of this news.  Perhaps they used their GPS systems, and they ended up 9 hours off course.  Or maybe, they wanted to start on flatter ground, to sort of warm people up.  Or, they wanted to challenge the god Vulcan and have all the athletes land in the thick of the huge ash cloud.  Or maybe, to apply a little conspiracy theory of my own, they decided to use the ash cloud to their advantage and limit the competition who could not arrive to Amsterdam airport on time...

Italy's Giro d'Italia - the bicycle race going around Italy but starting in Amsterdam. Soon to be renamed, the NetherItalialands Giro.

Francesca:
It's perfectly logical anyone with brains can see. Italians are greedy they need more Euros.

Actually, all three of the grand tours - Italy, France, & Spain - regularly go into different countries. Often it's for a stage or two at the start of the race, a sort of ceremonial thing, and sometimes it's in the middle when a road they want to run the race on meanders across a border. This year I think all three of the grand tours are starting in the Netherlands, which is unusual, but crossing borders definitely isn't.

Thanks Jessica!
I don't follow the tours -- just to the extent that I don't understand why, when they have no money to deliver my mail, the U.S. POST OFFICE has money to sponsor our riders...

So, always good to know!

Well, USPS hasn't sponsored a cycling team in many years now, so you'll have to find another reason to quibble with them. ;)

(Before I fell in love with calcio, my first sporting love was cycling - so you've recently hit upon the only two sports I can talk intelligently about!)