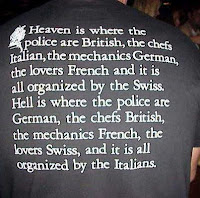 Italians love to say that when someone is "driving them crazy" that "mi sta dando i numeri" -- like in Bingo, too many too fast so it boggles the mind.  Living in Italy, you often are boggled by the numbers: bus routes, highway speed limits, even the little signs posted to indicate overpasses (and not kilometers) on the roads, or the use of Roman miles vs English miles vs Kilometers on those same roads.
So on a recent trip on Trenitalia back home from Milan, I couldn't understand why, for no apparent reason, no one on board could figure out how to count.  Suddenly, people were found to be sitting in everyone else's seats.  It was playing out like a large game of musical chairs.  I would have chalked it up to tourists...but, something seemed truly amiss.
I looked up and found the problem.  Trenitalia, in their unrelenting passion for providing no customer service, had decided to renumber all the seats.  Your ticket and seat were posted with a number.  Having done away with letters altogether.  Except that one look up on the wall, therein was the problem.  They had posted the new system without taking the previous one down.  I could not believe my eyes.
Reading the newspaper onboard, an Italian journalist complained how he witnessed two British tourist lose money when taking Rome's city buses:  The tariff had gone up from €1/ticket to €1.50. With swift Milanese planning, all of the ticketing machines on all of the buses had been tinkered with to accept the new amount and regurgitate a ticket in return.  Too bad, none of the machines had been painted over to change the €1.00 to €1.50, posted in extra-large digits. By the time the tourists figured it out, and started inserting more coins, it was too late -- their money had been swallowed up.  The journalist was embarrassed to overhear their epithet:  Leave it to the Italians for finding new ways to steal from tourists...
Of course, this episode may have occurred after the recent football win over England...and it was simply a case of sour grapes.  But as the journalist asked of his countrymen...
What would it have taken to just get it right the first time?!
And Trenitalia is vying for the right to run the city buses of Florence.  Caveat Emptor, you Florentines.

In this case, the FFSS and Trenitalia are not as stupid as one would think for leaving the old numbers. Tickets for todays trains have been on advance sale for several months now, so it is easily possible that a foreign tourist who pre-ordered a ticket with one of the (now defunct) Mini fares has a ticket with seat 66 on it, and not 12A.
The real question is why did they need to change the tried and true and basically functional numbering system that has been in place for the past (at least) 25 years? I can't think of any reason except to have a reason to pay someone (or many special someones) to reprogram the reservations systems and print out new maintenance forms and to print up the new seating numbers to stick next to the old ones and then to pay someone else to pull off the old ones in 4 months...

Well, I finally discovered the true reason why the numbering system has changed. Trenitalia put on the tracks some dazzling new trains - so nice, my boyfriend thought we were riding in 1st class!
These cars have numbering & lettering posted loud & clear on plexyglass markers right above each seat, right on the wall nearby, and above where you're head is.

Clearly, they're trying to cater to the mentally challenged American tourists.