Obama's Election and the women behind their men 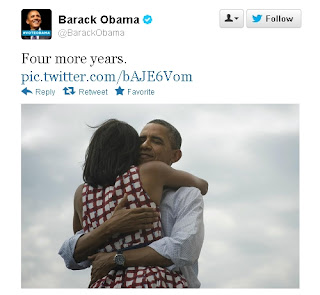 This picture released practically at the same moment that CNN called the election was picked up on practically every newspaper in Italy.  It hadn't even crossed my radar, really.   I initially thought the Italian's love for this photo and the accompanying latte & miele - milk & honey - headlines was simply a wonderful romance with - well, romance, but also with the Obama's.  But what was more striking, I believe, was the image of a fairly important politician without his dark suit on the eve of his reelection,  with his wife front and center.  And with her back to us, it was as provocative as Caravaggio placing a butt-naked cupid smack dab in the center of his picture of the Holy Family on their Rest from the Flight to Egypt.  For Italians, The Audacity of Hope is taking the stage on election night and hoping you don't stumble through her name when mentioning your wife whilst publicly declaring your undying love.  But generally, when pronouncements are made, they're dedicated to la mamma (like during the Oscars) or la mamma of one's offspring, but rarely the wife, partner, and wedded lover.  Needless to say, she's hopefully at home with the HD TV on -- that's about as close as she'll get to the real stage.
In Italy, politicians are rarely seen in public with their wives, and when it comes to women (or men) in their lives, the press practices a long held tradition of omertà -- a pat refusal no matter what the scoop to shoot pictures with mistresses in waiting limos outside public engagements.  Let's just say it's job insurance.  We've endured decades with Berlusconi before his wife told him to take a hike, almost never with her by his side.  Once twice-divorced, however, the "Catholic" septuagenarian couldn't wait to release photos of the hotties standing by his side.  Granted, Silvio & his second wife (who's name now escapes me - and Lord knows who the first one even was) were on different sides of the political spectrum, but so were Arnold & Maria Shriver.  And I don't think anyone could ever pick out the wife of Andreotti, a man who's been in politics since before the formation of the Republic of Italy.
While the Obama photo opp may be titillating, the travesty is that women in Italy since ancient times did actually wield great power, despite being shielded from the public eye.  Today, they're most likely desperate housewives you wouldn't recognize if you met up at the local bread shop.  This, of course, is the practice save during international exchanges when, of course, other wives are present.  Then (and unless you're Sarkozy showing off his Italian model), protocol forces them to bring out the wife to prove she does, indeed exist.  It's a rare newspaper that publishes the exchanges - and I found the practice only come into form with the arrival on the scene of model & singer, Carla Bruni.  American men trot out their wives (unless you happen to be married to Bill Clinton) like show horses as a very feature of the campaign trail.  Heck--often they depend on their wives to take the campaign trail even apart from the husbands, racing from city to city in a sort of divide and conquer-the-hearts strategy.  In Italy, where wives only separate from their politician husbands in August, leaving them to "work" with their secretaries in private, it's just not part of the playbook.  I sometimes wonder what Italy would be like if the women, too, could go back to calling some of the shots; allowing them entrance into the cigar parlor - like Margaret Thatcher - not Monica Lewinsky.
They say that women bring a different world view to business, politics and government.  Going back again to ancient times, women in Greece were hardly involved with their men, both in and out of the bedroom.  Perhaps today, Greece would be a different place if women had been allowed onto the front of the stage over there from the onset -- But could Italy, while melting at the sight of the Obamas, consider letting women in front and center before the country melts down?


For more of my mentions of the Obamas, just SEARCH in the above left-hand corner, "obama".
For my writeup upon Obama's first historical election (2009), click here and
for my thoughts after his inauguration, click here.

Now, for once lets elevate your blog to a much higher level.

In the Catholic Church, The Virgin Mary has as one of her titles.
"Queen of Heaven." Actually it is more accurately, Queen Mother.

The importance of "la momma" in this case the Queen Momma goes back to the OT. Check this out and it will show you how important a figure mommas were in those days especially Queen mommas: http://www.agapebiblestudy.com/documents/mary%20the%20queen%20mother%20of%20the%20new%20davidic%20kingdom.htm.

That's why Italian mommas in their very closely knit families rule the roost.

Davide - I clearly have missed my calling.

p.s. my condolences on your loss.

Gave some thought to renouncing my citizenship and moving to Costa Rica.

Good! You'll find it's not far from the American democracy model, although they do practice socialized medicine...(which, unfortunately, the U.S. does not nor will) -- excepting, of course, for most Medicare-military-congressional/senate healthcare.
But, since you fall into one of those categories, I'm sure you won't miss your coverage!
Enjoy.

Story told to me. In Guanacaste Province ion the Pacific coast. An Ex-Pat has a home invasion and he killed the invader. Yes, you can own guns in Costa Rica and defend your self and property.

At that time there were only two cops in Guanacaste Prov., each over 300 lb. They weren't about to go anyhere.

The Ex-Pat called one of then and said he had a home invasion and killed the intruder. The cop's reply, "You killed him. You bury him." The cop hung up.

Try that in Italy and you'd be bankrupt trying to stay out of jail.

Now that's the kind of sensible justice I like!