It had been such a long time since it had occurred, I almost forgot the practice.  So, continuing in the spirit of my Notes for Traveling Italy, I thought I'd let you know what may happen when you produce that Mastercard to pay for that priceless experience of enjoying an awesome plate of pasta.  Nothing.
Italy was slow to catch onto the credit card craze, and still much of society operates in cash.  That's primarily to avoid having transactions tracked, and most likely due to the age of the population.  And I don't mean just the elderly.  Since you may be living at home well into your 30s, Papà is probably not so over-the-top generous as to hand you his plastic, carte blanche, if you will.  In any case, as I mention in my book, when you finally go to pay your bill, suddenly every credit card machine is broken from Trapani all the way to Trieste.  The practice was so prevalent I always used to amuse myself in thinking it was due to some amazing hacker who would trip up the lines throughout the country each night, right at dinnertime.  But then, little by little, restaurateurs decided that if they couldn't beat 'em, they'd join 'em, and they'd swallow the 3% charge on the credit card [all the more digestible since it was the client who'd be actually choking down the excess charge] and accept the plastic with gusto.
And so the other night, when it came time to pay, the waiter gladly started the old familiar pantomine -- taking the card up to the register, and then returning quickly, saying apologetically, 'I'm sorry, there was something wrong with the line and the card would not go through.'  Quickly applying my very own first rule of Life in Italy, Never take 'No' for an answer, I challenged the verdict.  The proprietor, knowing me, and knowing I was not a tourist, just told me to come back another day and he'd run the card through again.
Back another day, the proprietor was not in.  And so, the cashier man said, "Sorry, our card machine line is out.  Can you pay in cash?"  Again, pleading my case [bear with me here...I wasn't intentionally trying to test the system by being a royal pain in the butt...I had forgotten my bank cash card numbers and was seriously out of paper money.]  Finally, the friendly waiter who already had learned of my predicament from the night before, came over, grabbed my card and said, "Let's see if I can't kick-start this thing."
And before I could say risotto arborio --- I heard the familiar purr signaling the receipt emission, grabbed a pen and put my Giovanni Hancock right to it.
Granted, most tourists don't have the luxury of returning another day..so one usually just coughs up the cash and calls it a day.  But in that case, you have to follow the monition of the American Express man if he happened to find himself on a tour of Italian towns:  Don't leave home without a big wad of bills.  Adding, for effect, but when you do, just be sure to Mind the Gypsies in your midst.
After all, being part of a ring of pickpockets, well, Membership does, indeed have its privileges. 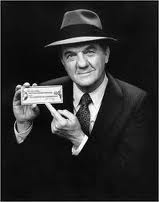 That's strange, I've never encountered such a problem in my four visits to Italy.

I always ask first before being seated...if they'll accept the card-- never wait for the bill to come ;)


For some reason I'm thinking of the dialogue you could have with the main character in 'The Accidental Tourist'...