Italy is known for its creative genius, probably a notch above the norm. So, I'm starting to think...that in this Brain Drain we've been having over the last few decades, that they're not the engineers and architects, pizza guys and researchers who've been leaving in droves: They are the people who are supposed to come up with terrific ads - so grande, in fact, that we actually want to go out and purchase something we don't need. Any long time readers of my blog or book will know that I believe the entire country needs a crash course in Marketing 101. So, here's the latest in the good, the bad, and the downright rotten in terms of my line of vision (since I thankfully have no TV): 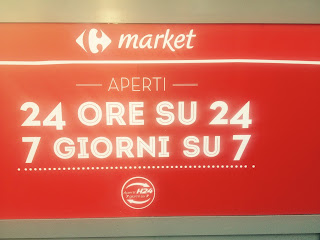 This August, when the streets have emptied, the store fronts have closed, a 25+ year dream of mine came true - A supermarket open 24 hrs. Why they picked the only time of year in which no human beings are in town to do so has kept me up nights. And while I'm thrilled to drop in at a reasonable 10pm or 11pm, really? We're going to go from supermarkets just making it til Sunday morning all the way over to 24/7 in one fell swoop? Talk about Culture Shock. It's like giving Africans iPhone 6s without walking them through land lines first.
But seeing that we all have long-abandoned Carrefour years ago when the crisis hit and their prices just kept going up to make up for the lost sales to the Austrian discount chains, it's going to be my neat little secret. No advertising, I can just see the September marketing meeting.
- What? You're telling me you sold 6 boxes of cous-cous and 14 tomatoes in all of August???
-- No, Sir, there was one American who purchased a box of Corn Flakes and some almond milk too. 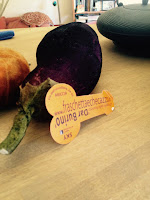 I wish I could have recorded look on the faces of the (very) elderly couple as they approached their car after coming home from vacation. The husband quickly tossed the advert off the windshield, but his wife, not missing a beat, asked him wth???
Now. This could be genius marketing, especially if we were living in 79AD and phalluses were really the in thing. Every home had them depicted on walls, they were sticking out of funerary monuments, and carefully crafted on every statue. But it's 2015.
And I don't know who did their focus groups...but, someone's got to tell these dick heads that generally speaking, it's women who a) make the purchase decisions of households b) decide to go out to eat and c) pick the place. The guy just drives and pays.
And, conducting my own personal poll of about one, I can confidently attest that when a guy asks you out to eat, and even though the Milanese have a tidy expression for what comes for dessert (Cina, Cena, Ciula - Movie, Dinner, Sex), there is nary a woman who thinks - Andiamo! - about having her date's piece in her mouth when she'd rather help herself to a plate of carbonara. So, guys, let her enjoy her meal first. Just saying.

The Malpensa Award • The Latium Region
[in honour of Milan's Malpensa - Illthought - Airport where you will always find adverts to fly in/out of there, as if you have any other choice] 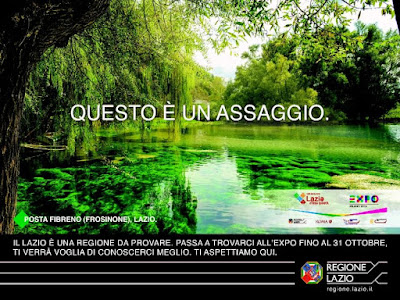 This ad has been plastered all over buses and bus stops all around Rome & environs. It boasts of all the great things our marvelous region has to offer; the riches, the gastronomy, I'm sure making a big splash while I type at the Milan Expo2015. The words across the top say This is just a Taste. Brilliant.
But the caption reads, Come and check us out at the Expo - You'll want to get to know us even better. Better than what? Or shall I say, whom? Better than someone who - ahhhh - LIVES in Latium? Better than someone who regularly visits the beaches? Drinks wine from the Castelli? Heads over to the thermal baths? So, yes, come up to the Milan Expo so you can take a look at what is in your very backyard. Glad to see our tax dollars at work. 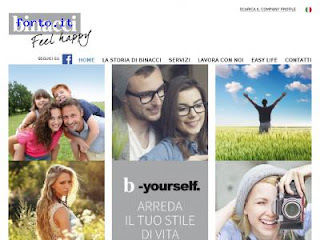 Although I'm going to mourn my morning LOL every time I left with the dog and got a glimpse of the latest narcissistic attack by Mr Binacci, this Feel Happy campaign is just great (save for its use of English - ugh). No more seeing him live out his 007 James Bond dreams, his Star Wars (or was it Star Trek?) fantasies, light saber and all...
But for those of you who might be nostalgic, I've already documented some of his follies in previous blogs entitled Advertising Age (live link). And did I mention he's trying to sell us a kitchen?


*The Clio Awards are for the Ad Industry, but my new baby kitty is Cleopatra