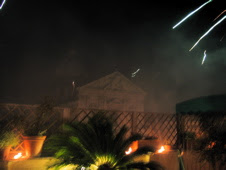 It’s a New Year, and, although the Italians ring it in with usual great civility – huge buffets with the traditional dishes filled with lentils to herald in lots of money, a sort of hamhock set in the middle of them, lots of spumante, pandoro & panettone, and the proverbial Midnight Kiss -- the headlines still screamed about the number of injured from setting off those “fireworks” (and I use the term quite loosely). 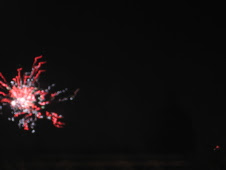 This year we were regaled by three incredible light displays seen (and heard – the shells were dropping right on top of us) off a gorgeous terrace overlooking Piazza Navona, but in years past it sounded like we were outside the green zone in Baghdad. Two guys I am quite positive were firing surface to air missiles and were engaging in combat. Judging from the amount of smoke filling the air, I think the guy in our building was winning. Car alarms were set off, windows were actually breaking, and our building was shaking violently. I went inside.

But it was the Italians who either invented fireworks, or, in the very least, borrowed them from the Chinese and then set off to make the most dazzling visual displays that money had to offer. One of the greatest experiences of my life was the Festa del Redentore, in celebration of the ending of the plague, held each July in Venice (and maybe these annual celebrations, hundreds of years on, serve a sort of preventive purpose…as we know how fearful the Italians still are about air).
And even the magnificent Trevi Fountain was designed by noneother than a fireworks designer, if you can believe it. Now that’s thinking out of the box to obvious great satisfaction for all!

But the Italians really know how to celebrate. In fact, while all the rest of the world has only one day to recover, we get an entire week. Come January 6th, we celebrate the epiphany, and the arrival of the gift-bearing kitchen witch (as I like to refer to her), who leaves coal or gifts in children’s stockings.
So, who in their right mind would or could return to work if there’s another holiday on the horizon? Work begins promptly on January 7th where I’m sure we’ll all spend the time exchanging photos, swapping stories, and basically carrying on our other happy traditions…

Wow! How did you get access to a terrace over Piazza Navona? That must have been something!

Since you're American, and a real fan, I'll let you in on it...It's owned by noneother than our Embassy. Chalk it up to the spoils of war.