Alitalia & the (funny) men at the helm

Call me superstitious, but it seems that the aviation industry in Italy truly never got off to a great start. After all, Italy is the land of poets and seamen -- nearly all of the captains and crew of ships sailing the seven seas are Italian. But frankly, I think things started off poorly because of the names—and although Alitalia is a terrific name, it did lend itself well to the epithet: Always Late In Takeoffs, Always Late In Arrivals.

Malpensa (“Ill thought”) Airport never quite took off. It’s now practically out of business. Only AirOne (“Heron”) managed to understand the importance of a good brand; even though it was also the name of an Italian nature magazine.

And so, it has not escaped me, that the people in charge of Alitalia’s revival have names that could errrr … not bode so well for the future of the newly formed Compagnia Aerea Italiana (CAI)*.

We start out okay, with Mr. Passera (“Hedge Sparrow”) from the Banca San Paolo, obviously putting his eggs in one basket, but hoping that others will join his flock and endeavor to let the CAI take to flight. 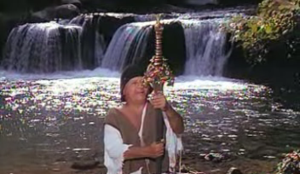 But, I lose all faith when the man in charge as Commissioner of Alitalia is Augusto Fantozzi -- Fantozzi being a favorite bungling figure of Italy’s film industry, a sort of Mr. Magoo. As Adam, God said to him, "Go out and multiply...as little as possible!"
One of his films was, Fantozzi contro tutti - Fantozzi against the world. Perhaps Augusto should take a look at it to see the outcome…

Next comes the Ministro del Lavoro, and the man who has his pulse on the numbers of people who will either be dismissed or, in the case of bankruptcy, sent home for good. This job is left to the appropriately named, Mr. Sacconi (“large sacks” like garbage bags). Certainly, when they say they’ve been sacked, nothing could be closer to the truth.

And while the white knight in this grouping, the President-to-be of the NewCo, Roberto Colaninno thankfully was christened with a name of no real derivation, I must add though, that the verb, Colare means to strain (unfortunately, not the kind he's doing as we speak, but the kind used for pasta). Precisely what he is trying to do by catching the good bits of Alitalia and basically washing down the drain the others.

But then again, “colare a picco” does mean ‘sinking straight to the bottom.’

*CAI is the name of a long-standing hiking group in Italy. Does this mean that, in the case of flight cancellations we should all just go take a hike?

Regarding La Notte Bianco - with fewer people, there will be less electricity used and hopefully, no repeat of 2003. But keep that computer charged just in case. :-)

how exciting, many more "scopperos" and delays to look forward to! :)))))

I forgot one more: Mr. Epifani, head of all the workers' unions. He's hoping, obviously, that the government and people holding the purse strings have their own Epiphany and save Alitalia despite their hijacking of the very jobs, themselves.