Well, this month has been filled with good news--largely because in September, my free papers returned to print, so, I've been able to find the good news to begin with! But, above and beyond the fact that Alitalia got it's flight license renewed (and you know, in some circles, that's not such good news), here are a few choice pickings: 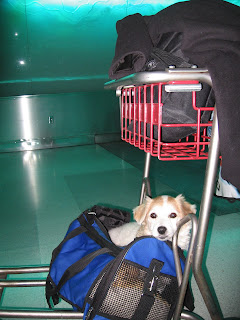 TrenItalia caved to pressure and rescinded its dog ban...Trevor is quite pleased about this one. And don't worry, all you non-dog people out there, he still prefers traveling in his doggy bag.
In the meantime, no one over there can truly explain how those dozens of dogs wreak more havoc than those millions of passengers...

Speaking of cleaning things up...my very own late night drives around town can confirm that the prostitutes are out of business (at least the street walkers, anyway). Rome's mayor started giving fines to those who stopped for a "chat" and, lo and behold...business was down.
Not that he truly resolved the issue -- turns out they've just set up shop outside the city limits.

The EU has brought down the ax on the Telecoms Companies -- stating that the charge for text messaging (sms) is out of hand and out of line. Naturally, Italian sms msgs cost even more than the rest of the Europe. So, look for declining phone bills shortly.
Perhaps because Italy is the land of Dante, Cicero, poets and priests...could it be that our messages are just longer, thus justifying the cost?

And, Italy finally joins most of the real world, in that little children can finally take their mothers' last names. This is Big Stuff and all the more important given the divorce rate.
Although, it did lead one commentator to speculate, 'what with the Mamma-society we already are, what will be left now for Dear ol'Dad??'