Bad News for Travelers to Italy 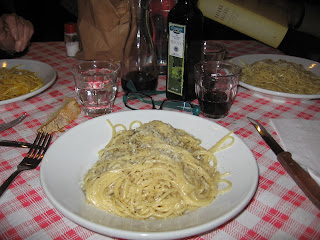 Well, it looks like the recession is in full swing, taking its ugly toll on those that we love the most…the tourists. Italy depends on them for much of the GNP, and yet, here we are, shaking them down to their very last centesimo. As the school of thought goes, ‘what the heck, we’ll never see them again!’ Hardly. Given the ease of travel these days, and the even easier, internet-as-word-of-mouth, you’d think people in the hospitality world would be a tad more…hospitable.

Last week, my favorite satirical show, Striscia la Notizia went undercover in Venice and found (gasp!) that restaurants had two price levels -- one for Italians and one for tourists. Just like in Bangladesh and Nepal. Now every traveler to Venice knows that the gondolas are over-priced, and that the price is even higher for the unsuspecting Japanese tourists, but what they don’t always know is that you’re forced to pay in advance for your 30 minute ride, which then brings you back to terra ferma in under 20. Ditto for the boat rides around Lake Como. And the new head of Italy’s ENIT tourism board wonders why Italy has service issues.

A pizzeria across from where I have always stayed in Venice (and have been dozens of times), first refused to seat me and my (Italian) cousin, then, sat 6 tables of locals after us, then told us we could only order pizza, while they served meat & fish dishes to the others (and we were speaking Italian!). An article went on to explain that many a Venetian albergo ranks at the top of travel sites' Worst Hotels' listings.

Meanwhile, American friends in Rome frequent a ristorante just off Via del Corso. Each time they go, they find a ‘mistake’ in their bill, never to their advantage. And while I, for one, have more often than not enjoyed a sublime limoncello offered by the house, I still wonder why I’ve never gotten a bill where the error was in my favor.

Last week, I took my mother & her husband out to lunch to a charming Osteria in Frascati. Hosteria San Rocco. We were treated to an exquisite homemade cacio & pepe (my favorite Roman dish), good wine and great service. We ordered a pasta & contorno (veggie), posted on the blackboard for €8. Once the bill came, however, we found we’d been charged 10. When I mentioned the “error”, I was accosted (well, that was after I took a photo of the board), and unceremoniously told to get out & leave the country. But they did give me all my money back, although I insisted that was unnecessary. I guess a little Italian and a camera go a long way. 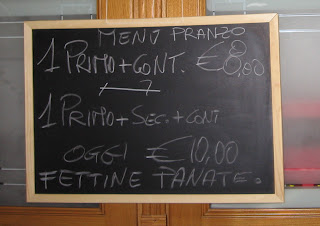 My conclusion? If you’re traveling to Italy, double check the tab, don’t be afraid to speak up (and for cab drivers who turn off the meter, just walk away). And don’t waste your money on a gondola ride unless it has been raining for 6 weeks and it’s your only means of transportation off the island. The bitterness of the ripoff will most likely eclipse the romantic 20 mins. you spent wandering the canals. Besides, there’s always Vegas. Oh -- and...don’t forget to have your camera handy.

The restraunts and hotels are their own worst enemies here, I agree. In my "hometown" of L'Aquila they usually try to get away without bringing a menu, which is great for clients that don't speak Italian. I agree with your suggestions.
I've also found it amazing the "only pizza" or only certain dishes thing, because Americans usually are the best tippers in a country where no one gives tips.
If you absolutely have to have a gondola like picture, take turns as others in your group take the public gondola service accross the Canal Grande. It only lasts a few minutes and they boatsmen are not very hospitable, but it costs a lot less.

Not ALL gondoliers are cheats and liars. And sometimes the best plates aren't on the menu (today's specials) although that is, of course, risky since you don't see the price. But most honest restauranteurs won't be too offended if you ask how much something is, if they haven't anything to hide.

Maybe I lucked on on my trip to Venice. Mind you I did avoid the gondola ride but had a lovely trip back to the airport via a water taxi.

@Ms Violetta:
just like in any tourist-ridden city, there are honest working people and people that take advantage of situations just because they know they can (never gonna' see them again...).

A gondola ride isn't necessarily something to avoid, but rather simply not something to improvise because you see someone with a gondolier hat standing near a romantic bridge you are crossing.

From my experience, most water taxi drivers are also decent folk, just like most taxi drivers in Rome, in Naples, in Milan seem honest folk for the majority (I've had some quite pleasant conversations in taxi rides in a country where the overwhelming majority of taxi drivers are still natural born Italians, and usually locals and a possible source of useful [es.: restaurant] information).

But I still get asked as I am leaving the train station or airport "taxi fuori/per la città?" to which I know to reply simply "no grazie" and wait in the "official" taxi stop's queue or go to the taxi consorzio kiosk, even if it means an extra 10-15 minutes' wait.

If it's any different in London or New York or Chicago I am guessing it is more a case of "self-policing" taxi unions (ie: unofficial thuggery), much like happens at Malpensa here, where abusivism is relatively rare compared to other turisty concentration spots.

If you aren't paying attention, you become a target, just like in any big (or touristy) city.

Jacque, I would agree & I love the Venetian water taxis. But those gondoliers...