I’ve been accused of carrying a lot of baggage, both literally and figuratively. And trust me, it’s the literally that really takes its toll… So, traveling around these days to towns large and small, I was utterly flabbergasted to find that Trenitalia, in its eternal march toward (non) Customer Service, has decided to turn your own trip into a death march of sorts, having decided to make traveling with luggage a thing of the past.

Once the war has been declared, historians can always point to the little incidences along the way which in truth led up to the full blown affair – like the sinking of the Mesopotamia. In the new and improved Stazione Centrale di Milano (where they’ve removed almost all of the fast ticket machines – needless to say, I missed my train), they’ve installed huge posts to block anyone carrying anything larger than a lunchbox from taking the escalators. At Milan’s newly revamped Porta Garibaldi station, I was impressed, until I discovered they’ve done away with the luggage deposit altogether. I had to lug my bags (included Trevor's doggie bag) to my meetings.

Italy’s train company has always been hostile to travelers, and especially for those with bags. Even the fancy trains to the airports leave no room – anywhere – for luggage. Arriving in Naples, there were precisely 29 carts for 33,243 passengers per diem. Communist Bologna, preferring the workers over accommodating the customers, never even had carts – you had to ask for help (errr, make that beg, plead, cajole and probably pay off someone, if you could ever have found them). In my hundreds of trips there, I never did. In the rest of Italy's Grandi Stazioni, in the odd instance you actually snagged a cart, they were forbidden in the waiting rooms. Go figure.

And so despite the insidious signs over the years, I was still stunned to find in exceptionally organized, wonderfully run and just a fantastic place overall to visit, Torino, posters plastered everywhere complaining about the missing carts. Actually, these folks aren’t really concerned about customer amenities, they’re worried about their jobs. And while I don’t have much sympathy for the probably 58 luggage cart guys who do the job of 2, nonetheless, in war, the enemy of my enemy is my friend.

Now, if they really want to make traveling with luggage a thing of the past, they’d sport curbside valets who take your bag and happily hand it to you at your final destination – just like in Morocco. 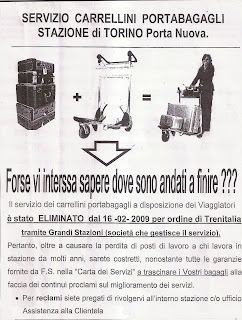