During this financial crisis, the French seriously mean business. After all, these are the ones who invented (and used, with relish) the guillotine. They’re also the ones, when angry at the government, tip over trucks to block the highways across the country. So it’s no wonder that they’ve taken up taking hostages in the forms of Company directors, each time layoffs are announced. A little vigilantism goes a long way… 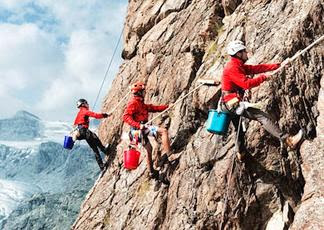 You know you live in a “picture perfect” country when you find an ad asking for volunteers to – I am not making this up – scrub the sides of mountains to free them from bird droppings. Seriously. Of course, it’s Switzerland. But, couldn’t they force those same bankers to get the job done?
Click here for the promotional video. But one astute commenter noted: Gli svizzeri puliscono addirittura le montagne gratis. Berlusconi, per pulire Napoli usa l'esercito in Stato d'Emergenza Nazionale. The Swiss use volunteers to clean entire mountain ranges. Berlusconi, to clean up Naples uses the Army in a perpetual State of Emergency.

Meanwhile, in Germany, a woman won a divorce case against her husband because he was a maniacal cleaner. I’m wondering if mothers-in-law would qualify for the same treatment…

And in England, I ran into a sign (I believe it was at the airport) that read, “NO clubs, bats, darts, snooker cues, knitting needles”. Darn. I was really looking forward to a good game of snooker with my lucky cue.