Considering that you can't even get a telephone line hookup in Italy in under two months, Berlusconi's affirmation that Aquila will be rebuilt in time for the G8 session in July borders on hallucinogenic. Problem is, it will probably happen, and he will achieve his dream of covering once-picturesque Aquila in swathes of cement [I reference the urban sprawl that is Perugia nowadays]. This is only one of the more strange occurrences this month. 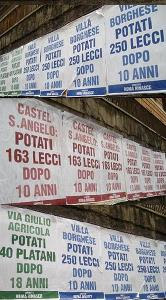 The City of Rome was plastered recently with posters showing the number of trees here, there and everywhere that had been pruned by the paid assassins working under cover at the Servizi Giardini. I thought this was a good thing (they numbered in the thousands), until friends pointed out, "What capital city boasts that they've pruned trees for the first time in 10 - 12 & 18 years?". Point well-taken.

And then there's the incredible situation at my favorite, the Poste Italiane. All of these state-run monopolies, were started to be, uhhhh, exactly that: State-Run Monopolies. Turns out, Italy's State-run Antitrust Office has decided to file a ruling against its own kin, for Abuse of Power stemming from their lofty Monopoly position.
So much for sticking to your Mission Statement.

But, the prize goes to the Comune di Roma's AMA - garbage office. Navigating on their site recently, I was utterly dazed and amused to find their own special pages dedicated to Italian Cinema. Turns out the Refuse Folks also run the cemeteries. And now I see why Italy is so bad at recycling -- absolutely next to no one gets cremated here.... And the Cinema connection was a tour of the tombs of the leading lights in the Italian film industry.
Or is it a not-so-subtle hint that most of the movies made here are just pure trash??


Picture by Agoravox.it / Their terrific posting on the trees here.