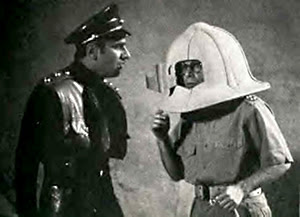 July 20th (21st in Italy) marks the 40th anniversary of the American landing on the moon. Everyone is making a nod to this great event, with TV specials, documentaries, interviews, heck – even Louis Vuitton came out with an extra special ad and web feature (as if they were the Official Sponsor of the Nasa Suitcase Supply).

In Italy, that fateful event did not go unnoticed. In fact, it remains in the collective consciousness a day of celebration for all mankind (except the ones who still believe it was all a hoax) and one of the great moments for TV reporting. In fact, from that day forward, TVs needed to be in every home (and with it, the notorious TV tax). While watching an excellently-commented documentary on Italian TV of the significance of that great day, I learned so much – not about opening frontiers where no man had gone before – but about the long-standing tradition of television bickering which started then; and is still going strong these 40 years later.

On that fateful day, over 20 million people were glued to their screens. It was the first all-live – 24/7 broadcast ever – a telethon of sorts lasting 30 hours. But, true to Italian organization, the only moment that was not broadcast was the landing itself. The reporters covering the event had gotten into an argument over whether or not the landing had just occurred. In their squabble, 20 million people tuned in to miss Armstrong’s fateful declaration, “Houston, the Aquila has landed.”

Basically, Tito Stagno, comfy in his RAI studio in Rome, was shouting (probably to best the on-location reporter, Ruggero Orlando live from Houston), “It’s Landed!”  Orlando chimed in, “No, it still has 10 meters to go!” Stagno couldn’t see the images just then being transmitted. From the base on the Sea of Tranquility, Stagno, trying to be the first, went down in history all right – for muddying the waters – as his name, Still Pond, suggests.

Another tidbit: The only other person who couldn’t see the landing was the third Astronaut, Michael Collins. His job was to stay in orbit to retrieve his comrades. Fittingly, our Michael was born in Rome – on the Via Tevere.

As the reporter for the Corriere della Sera so appropriately remarked of the occasion, “Noi siamo di quelli che quando il dito indica la luna, guardiamo il dito.”
We’re the ones who, when indicating the moon with a finger, ends up peering at the finger.”

Francesca:
What was so "infamous" about the landing other than the undermentioned Italian chaotic reporting thereof?

I meant infamy in the context of the reporting, but now I see it's a bit misconstrued.

Although it turns out that, had they not landed right then and there, they would not have had enough gas to return to Earth. And that would have been pretty infamous.

But, I'll make the change.

and to honor the day, there is going to be a free concert tom eve in roma in piazza del popolo!