Traveling with Pets in Italy: A resource guide 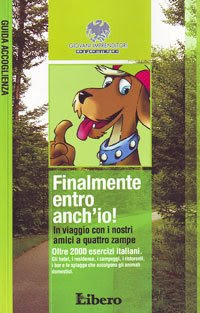 Here we are, at the onset of the summer onslaught – not due to the traffic jams of millions of autos piling up on Italy’s highways, but to the number of dogs that get abandoned unceremoniously on the sides of those same roads, only to have the last sight they see, the oversized rubber wheel of an SUV.
It would appear that government budget cuts and a general lack of funding has left us without even the guilt-inducing posters all around town in a (vain) effort to get people to stop this annual act of cruelty inflicted on man’s (purported) best friend.

But, I bring you good tidings: There are two things to be happy about this Summer of 2009:

One, I’m thinking that the economic crisis is forcing so many families to stay put, that little Fido doesn’t have to fend for himself in front of the fenders.

And, starting on the internet but coming soon in a book, conscientious citizens, hoteliers, beach fronts and other tourist businesses are busy bragging about the fact that they accept dogs. This may also be due to the idea of attracting customers, but hey, anything that could reduce the number of canine casualties is a good thing. The government seems to believe that the old posters probably didn’t do much anyway, so they’ve set out to promote all of the places that makes pooches portable instead.
[Once we got around the absolute fools at Italy’s TrenItalia who wanted Rufus off the rails and consequently on the roads, they, too, can be included in this listing]. Even the Autogrills set up – in cohoots with volunteer organizations – little doggie parking lots at highway rest stops so people don’t leave Lulu in a 200 degree car, thinking they’ll ‘be out in a minute’ (you try going through those awesome mazes once inside from front to finish in under 12 minutes…!)

Here is a list of terrific sources as reported in the Corriere della Sera’s CITY newspaper:

FINALMENTE, ENTRO ANCH’IO! www.turistia4zampe.it  [You can supposedly search dog-friendly facilities, but I think TripAdvisor might be a better bet, since the site doesn't seem to be updated since 2010 - like most great initiatives, never followed through after the initial launch].

In Rome’s Ponte Milvio ‘beach’, dogs are welcome at the Villa bau village, complete with activities for you to enjoy with your pet.

Need to take Trixy in a taxi? www.taxideglianimali.it (they even pick up corpses - you know, after they've had a heat stroke on the beach above)
Although, I must say, only in Italia would you find that the article loaded with excellent info on traveling with Toto offering some sage words of advice to all those dogs (namely, all of them) who stick their head out of car windows: Attenzione! for the Colpa d’Aria!
Whether that admonition is for Oscar or his owner, that’s for you to decide.

Francesca:
We have a big problem here with people leaving their pets behind when they're evicted from their foreclosed homes.