Some of this is a bit old, but I loved the 'news' so much, I thought I'd share with you some stories from far and wide... 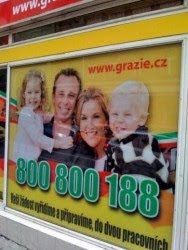 Il piccolo mondo...A St. Louis family posted their photos on the web.  Their friend, on vacation last June in Prague, happened upon their mugs posted on huge outdoor advertisements for a store there.
But...notice who's advertising...although those kids look anything but Italian, it's an Italian grocery store.

While in the UK, those Brits love to talk about the weather. But now, they have a whole lot more to talk about!  The snow?  Well, kinda.
Turns out, the BBC got so mad at the weather "forecasters" (quotes totally intentional), when they didn't predict the huge snowfall - they put at risk the fishermen who depend upon some measure of accuracy.  As a result, they want to shut down the office and replace them all.  There's talk of using the Swedes instead.
I guess from Lapland, they know a snowstorm when they see one.

And, back in Italy, Rome continues its march to turn the once-prized 'Most Green City in Europe' to the 'Most Green City near the Sahara'.  Instead of bothering to spray the tall palms in the EUR region, they decided to simply do away with them instead.  And again, along the once-beautifully tree-lined via Trieste, we now can have uninhibited views of the graffiti and smog.
And yet, the city continues to wring their hands over what to do about the small particle pollution and relative high incidence of asthma and other costly maladies.  Couldn't we get the pollution guy in the same room as the parks guy?  I sometimes feel it's like Arafat & Sharon...

"Couldn't we get the pollution guy in the same room as the parks guy? I sometimes feel it's like Arafat & Sharon..."

Stands up and applauds.

Am so sick of the "decaptiated" look of the pruning plan. Looks like the tree surgeons have a slash and burn complex.

Very amusing post! So happy to have discovered your blog. Quick question about your Agrigento guide...do we rent it at the site or can we download it directly to our I-touch? Would love to have it for our next trip to Agrigento.

You have to rent that guide on site (available in 3 langs. and also at the outstanding archeological museum nearby).
But, stay tuned. The contract's coming due, and I might just get my grubby hands on it for an Artineraries Tour!!!
www.touringtracks.com

p.s. My brother made amazing t-shirts of the temple della Concordia for my nephews. Watercoloring his photo and adding, "Agrigento Costruzioni SpA" on them...

@ Sarah -- you think there's a plan??? I'm convinced they're paid by the mulch.
When they razed our beautiful street, many of the leftover trunks were in perfect e.g. not rotted condition...

Look, it's just not true that we Brits go on about the weather. I mean, it's a lovely day today here in Milan, sunny too. Spring could be on its way. How wonderful. It was grey and a little cold yesterday, but much better than last week. And the week before? Wow, it was so cold. I don't think it'll rain tomorrow, though.

Sorry, I digress. Now, what was I saying? Ah, yes. We Brits never go on about the weather.

PS How is the weather in your neck of the woods? I heard it was cold.