Italy: Attack of the Clones

This week, I brought my little nephews to see one of the greatest sights in Rome – located right next to the Colosseum.  No, it’s not the Forum nor the Arch of Constantine, nor even the Palatine Hill where our word palatial comes from.  It was the 3D film of all of Ancient Rome, reelaborated by the University of Virginia and brought to you by Rome Rewind.  It took a Brit (and British humour) to give us an improvement on Nero’s age-old Anfiteatro Flavio [yet another example of the Italians’ penchant for naming things two times over…].

We learned many things about the area, gladiators, & the monuments before stepping into the past and visiting the Roman Forum in 3D.  Afterwards, the kids enjoyed dressing up as gladiators, battling, and playing video games on Ancient Rome.  Having read many of the Caroline Lawrence's ‘Roman Mysteries’ stories, they already knew a lot, but even I learned something new.
In an Ancient Roman update (or is it a back date?) of Sesame Street’s ‘one of these things doesn’t belong here’, we discovered that things like soap or waxing hair were not used by the Romans.  But, the most surprising was that tomatoes – yes, tomatoes! – did not exist in Italy in ancient times.  In the country that gave us pasta alla Bolognese, this discovery was mind-boggling at best.
That is, until you stop and think how much Italians copy things (from test answers to shoe designs, to cash card cloning to most everything).  Only thing is, unlike the Chinese (or the Americans for that matter – who gave us instead Tuna Helper, Olive Garden restaurants and The Venetian in Vegas), they tend to make them better.  Ford may have given us the Model-T, Italy brought on the Ferrari.
And so it was with tomatoes.  They supposedly took that pasta from the Chinese and opened ristoranti far and wide.  Prosecco is beating Champagne right out of the market, and kiwis?  What the New Zealanders thought was only theirs, is now exported in even greater quantities from the Bel Paese.  Heck – it’s said that they were Egyptian Pharoahs who sent slaves up mountaintops to bring back lemon ices.  Now, you find them sold off street carts in Spanish Harlem.
It was only so long before Italians would start copying each other.  Thus the latest rules & regulations governing all of their fine treats:  Prosciutto di Parma only from Parma, Prosecco D.O.C. only from Veneto, Parmigiano and mozzarella only from a certain type of cow…
But, considering the Chinese actually copied a Ferrari down to its decals, I predict it’s only a matter of time before we see gondoliers drifting up the Yangtzee River. 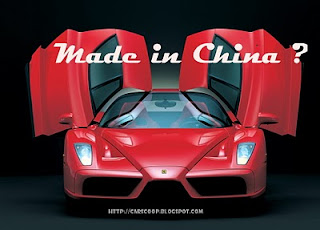 Francesca:
But did you let them see this. The man called the living camera!!!

How about offering up accessible Italian "copies", such as the FIAT? Why is it always the exclusive Ferrari? How many people have experienced that to even make a judgment? Are there no other Italian improvements of foreign products they are proud of?

Were tomatoes really "copied" or merely used in a fashion palatable to the Italians at the time? Like kiwis, I think they were just something that happened to produce well in the Italian climate, and have not been "improved upon".

Is Prosecco an improvement on Champagne, or just an Italian version of a sparkling wine? Did the Italians set out to compete or improve on Champagne?

The Olive Tree (do you mean Olive Garden?), definitely Italian inspired (according to their ads and website) but adapted to U.S. tastes, much like American chains in Europe adapt their menus to their respective tastes. Improvements in either direction? Not necessarily.

And the Venetian, a blatant copy of the Grand Canal, and does not pretend to be anything else. Including it here does not support your argument any more than the Paris down the street is trying to be an improvement on the real thing.

Have enjoyed reading your posts, and will come back soon so I can read more 'back posts'.
For several months I took a few online Latin courses - and much to my delight the historical settings were used as the backdrop for their lessons. It was fun to read about some of the same sites in your posts.

@cuz Liz: Well, that was a mouthful! Thank you for your assessment. Here are my responses:

1. Well, you know what I think about the 500 so yes, when the U.S. came out with a huge cars (think Pontiac-Buick), the Italians came out with that one - for the everyman (except they stuffed entire families inside). So, how's that for accessible?

Alessi - if it weren't for their burning hot handles on teapots improved a daily product.

And Barilla gave us incredible pasta sauces & frozen foods judged by grannies while Americans were left with Prego sugar sauce.

2. I'm fairly certain that they set out to copy the 'ol tomatoes & kiwis fully understanding they'd grow ok here, if not better. And, do it to compete. Just like ancient sculpture their incredible artisans knocked off the greeks...

3. Prosecco is DEFINITELY an improvement on Champagne (and I just had a bottle with friends).

4. Tuna helper is a poor copy of pasta with Tonno. Hamburger Helper I think they copied people grinding up shoe soles...and eating it.

5. Olive Garden - thanks. It's a shame that the 'adapting to US tastes' usually means less taste & larger portions.

6. The Venetian is a blatant copy & proves my entire point.