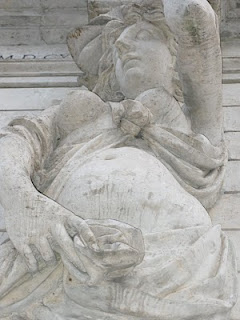 I have finally figured out the true reason behind Italy’s low birth rate; abysmally low despite the hearty self-proclamations claiming to follow the dictates of the church.  No, it’s not what the sociologists say: that low birth rates are due to an ever-increasing financial burden, the fact that most households need two incomes, nor even because mamma’s boys are still getting pampered at home at 37 (although that certainly could be seen as a mitigating factor).

No, while in most countries, pregnancy comes with rosy-cheeks, baby showers, pats on the ever-bulging tummies, heck -- even photos on facebook;

in Italy, pregnancy is seen as a near terminal disease which will wreak havoc on your entire being, body and mind until it is excoriated with the birth of the bouncing bundle of joy.

Of course, once born, childhood looks much like the outside re-creation of the ‘womb’ – with insular padding and closeness in proximity to mamma – and mamma only.  It’s like bubble boy – except mamma’s in the bubble with him.
My sister-in-law told me her Italian babysitter, two months pregnant, is suddenly not showing up for work despite claiming not to have perma sickness.  Like most Americans, she had worked up until the day she had contractions to give birth to her overdue twins, and so was quite perplexed.  I told her to expect the worst.  While my own assistant could no longer ride a bike, exercise, nor think about movement, let alone eat food (she dropped everything that might have been in contact with actual earth or animals), my American friends were heli-skiing 5 months pregnant. My other sister-in-law joined a gym after becoming pregnant.  So far, the babysitter has come down with every sort of malady listed in the ‘Merck Power of Suggestion Manual.’
The idea that you have to ‘get through’ pregnancy as if it was akin to sleeping on a bed of nails for 9 months, must be enough to put everyone off of it.  I mean, if you were told you’d experience 9 months of pure hell, even your parish priest might let you off the hook for using birth control.
It is so pervasive, that I sometimes wonder if those crazy images of monstrous satan figures you see on the walls just before exiting a church haven't been updated to depict the maladies that women suffer during pregnancy in the more modern ones.  And you thought it was labour that God gave women as a special thank you note -- In fact, it was the whole childbirth thing -- 9 months and all.
You heard it here first.

Having been through one pregnancy here in Italy i completely agree. I loved pregnancy and felt fine but all the other women in my childbirth class moaned and groaned about how awful it all was and stayed home from month 5 onwards with notes from their doctors saying they had a gravidanza a rischio. The gravidanza a rischio didn't seem to stop em from socialising, going to childbirth classes, going on vacations etc though! I asked one of them why she'd stopped work so early and she said 'becuase I have to commute to work on public transport and it's soo hard." I took the metro to work up til month 8 and it was great - people fought eachother to give me a seat.