Another one bites the dust

This summer something surprising took place -- so unusual that it took even the Spaniards by surprise.  Catalonia, seemingly in step while Spain marches toward modernity, disbanded its corrida, or the tradition of bullfighting. This bold step was forced upon legislators through a referendum, and while the corrida is seen as part of the very fabric of Spain, out it went.  Of course, it will remain to be seen if the practice then goes the way of cock fights or dog fights, to back room deals done under cover with blood spilled out of sight.  I'm wondering what the matador union had to say about the whole thing and what they're torreros will do for new employment.  Become showmen in a sort of Espana amusement park where they fight mechanical bulls?  It worked for the cowboys of America. Or will they take to the streets to convince people that slowly killing animals in public is truly an art form.  Next thing we know, arenas will be built for all those hunters out there, asking for stadiums filled with game...perhaps that's the real ploy here -- a return to the Colosseum games.

As a result of this historic vote, the emboldened animal rights activists in Italy launched their annual appeal to stop the slaughter in Siena.  Siena's Palio, taking place almost continuously since 1590 (naturally, the day I arrived it was cancelled due to one jittery = overdosed horse jumping the gun too many times) is considered a tradition which should be upheld no matter what.  In 90 seconds, horses round that central piazza with jockeys vying for first place, or, holding back (if they can rein in their scared horses) due to the backroom deals struck the night before. By 2004, 48 horses had died in 34 years. 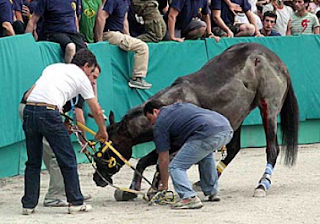 This year, Italy's Minister of Tourism chimed in saying it was a medieval game (she got that right) that has run its course.  Mayor Cenni responded with a bold attack; saying that it was an insult to all of Italy not to uphold such a tradition, that'd he'd take legal action (on what premise?) and that it promoted tourism.  With that rationale, I think after they've restored the Colosseum, we might as well restore the ancient games and gladiators -- it would certainly attract tourists, and it seriously is a tradition from days gone by.

It will be interesting to find what might happen; not so much in Siena as in Rome - I'm looking forward to booking my tickets to the gladiator games as soon as they're on the program.

Catalonia disbanded its corrida mainly because it's a typical Spanish event, part of the Spanish culture and here they go against Spain once again because they want to be a different country, they want to be independents. In Catalonia there are still several traditional events where people don't care too much about animals, but whatever is Spanish is seen like something bad or something that has to be over in order to keep distance from Spain. Propaganda? I wouldn't say fair play to them, that's for sure.
I'm delight they disbanded corrida, but it's sad to think about such a reason.

Wow. Never even crossed my mind. But, didn't it originate in Catalonia?

Hooray -- a great victory for animals! I was there when the vote occurred. Everyone I spoke to was totally against it but they didnt think the measure would pass because of money.