While vacationing in the Sabine hills, we canvassed the caretaker of the olive grove so we can bring home bottles of the outstanding oil they produce.  We were led into what was once the cloister of the monastery to 'the olive oil room' - a room filled with humongous terracotta urns dated to 1875 and filled with the dark green drink of the gods - Tuscan Tea (or in this case, Lazio liquid). 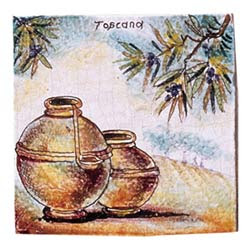 He had two tiny samples of last year's production, sealed with wax and a strange seal and labelled accordingly.  He then related his remarkable story:
Last year, they ended up with a rather large overrun.  After testing the quality, they contacted one of the large olive oil branding companies to come and purchase the overstock.
Company lab scientists turned up with white coats.  He showed them his antique testing kit and told them that the quality level was a very high '17'.  They asked for more samples to test them themselves so he gave them a few bottles, with a seal.  He pulled out the 1ft. long iron skeleton key from the huge wooden doors.  This key is the only one that can remove that seal, so anyone who checked would know that that olive oil came from this farm.
Upon their return, they learned that the quality was even better: a distinguished '18' and so the deal was done. The price offered (and gained) for this King of olive oils was, in his words, 'disgraceful'.
Next day, Company technicians showed up on the doorstep of the monastery with a huge tanker in tow.  There were three men, dressed in white laboratory coats and sterile gloves.  Naturally, the truck couldn't make it up to the actual monastery so they had to use a big long hose to pull the oil out of the urns. One man manned the truck entry, the other the hose, the third posted in the urn room.  The truck could carry 150 quintals (a ton of tons...) and they were only picking up 20 so no problems expected there.
Incredibly, and much to the astonishment of the caretaker, at about 17 quintals, the guy in the truck starting shouting his head off.  Basta! Basta! Enough! Stop!
The - presumably - empty truck, picking up the finest quality oil around, was by now about to overflow.
And off they went, their lab samples in tow, signed - sealed - delivered for whomever may ask -- all of the oil in their tanker to be bottled and sold to the public came from the lovely fattoria in the hills...

Hey Francesca:
If it's that good don't be such a poop, go buy some and send me a bottle or two!!!

Yeah, what he said!!

Though, it kinda makes you wonder if, since the truck was apparently about to overflow, were they actually mixing it with inferior oil then planning to sell it as the '18' quality? Wouldn't surprise me.

My thoughts too Cuz. Here in Scottsdale at an exclusive chain AJ's I can buy a small bottle of Laudamio by Frescobaldi though I'm told now that it was sold to Peter Mondavi. It won best Oil in italy I think 2005. It costs $35...Yikes! It's used in my house on crusty bread or Bruschetta only.

@Liz/that's right. But the seal & the skeleton key shows that 'virgin' part of it - call it a rape if you will.

@Dave/the oil's pretty good. But I am still partial to oil from Trevi (where Trevor comes from). But, I think the best was an oil a friend brought from the hills of Liguria, and I still remember it...
But, go wild & use it on salads, too.

Francesca:
Don't go prattling on about this or that wonderful oil. Just buy me two bottles and ship them over...be a good girl.

- The Bio olive oil from Lazio region that is outstanding & smooth

- But one of the best olive oils I've ever had actually heralded from Liguria.