As a followup entry to 'Baby you can drive my car' below, I'd like to heap some praise on our fledgling Detroit automobile company...But first, the bad news:

FIAT (and incredibly, NOT Chicco, the baby seat/baby toy producer - go figure) conducted a study outside schools & nursery schools in which they observed parents & their darling offspring.  They confirmed what all the rest of us foreigners already know:


Despite supposedly holding their single child more dear than even God himself (sometimes the two indistinguishable from one another), Italians are pretty careless with their heavenly little cherubs.

Okay-I'm paraphrasing of course.  That's NOT what they studied.  They found that: over 60% of Italian children are put in cars with no safety belts or safety seats whatsoever.  Now, they know they're Italian because, let's face it, the immigrants usually don't have cars, or, their parents are too busy trying to make a living, than to cart children around town. Ride the bus and you'll know this is true.
What's even more remarkable, is parents' complete ignorance of the facts:

- Car accidents are the number 1 cause of death for children aged 5 to 12 (although I'm sure that's pretty universal)
- Each year, 10000 kids wind up in car accidents (that's 30 bambini per day)

And why they still don't cough up how many actually die, they say that safety seats would guarantee a 70% chance of surviving an accident (and no, that does not mean children strapped in the front seat with tiny heads in front of an airbag pronto to release at 160 km/hr).

What they need is a bit more of that American knack for creating a nation of people unable to do anything on their own:  Sue everyone you can when you're own stupidity caused the accident in the first place - heck- it's like winning the lottery - only easier! 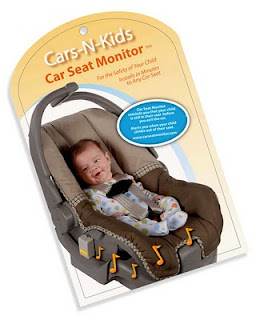 As a result, a mamma told me that in the U.S., the hospital walks you & your baby out to the car.  They help you put the baby in the car seat and make sure it's strapped in properly.  No seat. No baby.

In Italy, they send you home with a mild warning: "Whatever you do, make sure the baby travels flat on its back for the first few months."  Now - you can imagine what that kind of propaganda does for the car seat people...

Why Chicco isn't all over this is still beyond me, but in the meantime, I only hope that FIAT quits wasting money on 'studies' and allots their car seat behavioral budget to me instead.

And those careless Americans?  Turns out they have their own little epidemic going...forgetting kids in cars altogether - It would seem Americans are wound so tight with kids strapped in so well, that the kiddies don't even peep while daddy runs to the office -- for 9 hours.
Thus was born the baby seat monitor (pictured above) and ZeroSeconds.

I guess that's one problem that Italians succeed in avoiding - hard to forget an 8 lb. baby when it's sitting right on your lap...