I remember in the 70s & 80s people loved to quip that there was no such thing as a native Californian (and once they elected an Austrian as their Governor, I believed it). Come to Paris, and you start to think that the proverbial Parisian man is on the endangered species list (not that that’d be a bad thing).

While in bustling London you see faces of every distinction, you always get a very firm sense that there’s still an English something-or-other about the vast majority of them. Those pasty complexions, the rosy cheeks, the micro-mini skirts in January, the stone drunks at the pub…you get my drift. Not so Paris. 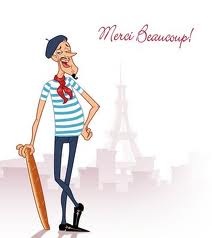 Paris seems to be the ethnic hub of the world where people from every extraction seem on the go. It’s as close to New York City that I’ve ever seen, except when factoring in those real Parisians, the average weight & size changes a bit compared to their American fraternitè. Riding the subway, I felt like I was in the Grand Bazaar while above ground, Indians mixed with Chinese, Japanese, American and -- everything in between.

The Parisian male – you can spot them as fast as an albino in a troop of Chimpanzees.  Although, with their scrawny stature, they should be a whole lot easier to miss. Gaunt faces, no shoulders, and let’s just say, better they don’t even attempt to fill a pair of Levi's. No wonder they wear such fine threads. Take, for example, their hottest star to cross the Atlantic - Vincent Cassel (Ocean's 12 & 13) - I rest my case.

It could be that perhaps, like the Milanese, Parisians just don’t take public transport – leaving the cattle cars to the rest of us pèons (spoken with decidedly French accent). But for me, you want to see the future of France, go to Paris – There are no native Frenchmen – and it probably won’t be long before the baguette is fossilized for visitors to the Louvre.

*For more fab Frenchmen in movies, check this out

Francesca:
"and it probably won’t be long before the baguette is fossilized for visitors to the Louvre and the Caliphate comes!!!"