Italy: A Snapshot from the Past

I occasionally enjoy thinking back on 'how things were' in Italy, in the not-so-distant past, and how far things have come in terms of services and general quality of life issues.  In these overheated summer days, you can bet that the appearance of air conditioning is right up there in my top three improvements over the years.   And of course, whenever I can get close to an octogenarian, those old war stories or 'slice-of-life stories like when the most exclusive parts of Rome were once considered the dregs of the earth, or the earthquake that hit in XXX, or hearing tales of family outings on one single scooter... well, they provide food for the soul.  Occasionally, I post my own features here on the blog.

During the summer, many of the movie theaters in Italy take a hiatus.  It doesn't really matter, because you can go to any number of outdoor arenas that put the 1950s American drive-ins to shame.  Italy loves cinema, and cinema loves Italians.  You can find a wealth of movies for almost every taste at any number of movie houses, in a vast array of art houses, and at cinema clubs showing films dubbed to perfection.  Today, you can choose from films from nearly every country, and practically every century since celluloid.   But you don't have to go back as far as Cinema Paradiso scenes to recall what movie going was like before the age of mega-cinemas and Dolby Sound.
It may have taken awhile to get the refreshment stands in cinemas (something that most wise Italians will insist is not an improvement), and a bit longer to get them from stopping the film mid-reel (a heinous event that still takes place, much to the moviegoer's chagrin)  but, the comfort level at most places small and large has gone up in my lifetime exponentially.  Even in tiny cinemas, you can be seated in huge lounge chairs and treated to two hours of great cinema, some seats even sporting cup holders attached.  Under these conditions, I could even get through Bertolucci's 8 hr Novecento masterpiece. 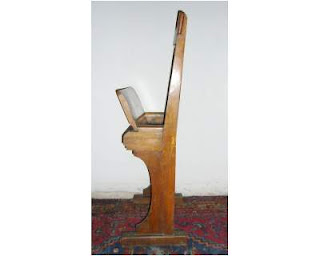 After this charming specimen met its match and ended up as kindling wood, cinemas often were furnished with regular old folding chairs, carefully lined up in rows and rows.  This was circa 1980s Milan.
The chairs were not the issue.  The problem was, of course, the flow.  If a tall person happened to sit down in front of you, your viewing was impaired along with the blood flow to your legs.  I remember watching entire movies without the benefit of the right hand corner or mid-section of the screen.
It's a problem resolved only recently by the airlines with mini-screens at the back of each seat; and one in which I'm quite certain, if churches ever succeeded at tackling, perhaps more people would attend the sermons, concerts and other offerings - instead of winding up with an obstructed pew seat.
Nowadays, and only after extensive restoration work altering the slope of cinemas and inserting layered seating, can the Italian movie experience be rated four-stars.
And seeing that Italian movie buffs rarely interrupt their films with the sound effects of munching on popcorn and treats, if we can now just stop the darned intermissions countrywide, we would win the Oscar for movie-going.

Click here or Check out my 'Favorites' listed on the blog (right hand column) for my book excerpt on Cinema intermissions.

Hi! It's been ages since we exchanged messages... I'm still interested in having you speak at Camp Darby, outside of Livorno, if you're willing though! Any chance you're available and interested in a trip up on 5 September or 3 October? Let us know at friendsofcampdarby@yahoo.com.