The Joke's On Me

Over the weekend, I spent a couple wonderful days basically eating in and around the old Etruscan hill towns of Viterbo. In between meals, I was invited to enjoy various religious festivals and other events including taking a tour of the wonderful town of Castel Sant'Elia.

It’s a place overlooking an incredibly verdant gulch spotted now and again with grottoes which looked like they would be ideal real estate for a hermitage (and I don’t mean for the collection of artworks from Russia). Turns out they were. 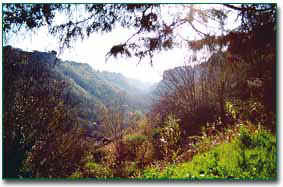 Our group, including the Town Mayor, was taken around by a highly passionate architect and historian. At the stunning Basilica, with its ornate Mosaic pavement and lovely wall frescoes on the edge of the gulch, our guide mentioned Sant’Anastasio, probably depicted somewhere on one of the walls (I confess I was busy taking photos at this point).

Up walked an elderly woman who chirped, “I actually know a lot about Sant’Anastasio.” And, as she was filling us in with details on his life, she turned totally pale, began trembling from head to toe, and started channeling…none other than the Saint himself! This struck me as being so totally freaky (and I’m usually game for such things), that I left the church where I later caught her copping a smoke on the wall where I was sitting. 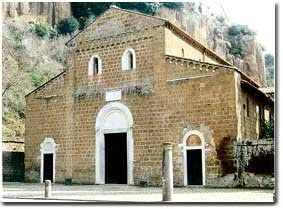 Afterwards, happily eating once again, I asked if the mystic had been some sort of tourist attraction plant…I mean, it certainly added to the 'experience’ of the place. The organizers quickly observed, “No, only in America would you find those sort of things!”

A "plant"? How could you possibly even ask if such a sacrilege could even occur in Italy???

Actually, the Italians find those typically American reenactments (in fact, they're called disparagingly, 'americanate') quite abhorrent. They look at it as Disneyfying their cultural treasures...
Heck, it took them 'til 2002 to let Centurions wander around the Colosseum, and there is still a lively debate raging to let them stay.
As an aside, there's hardly an Italian in the lot!

Now that you have Silvio "El Duce" Berlusconi back in the saddle, the full force---farce of Italian Chaos can be better appreciated.

I love Italy and the Italians but not Italian Chaos. You must remember started in the 7th Century BC, when there were over 20 major languages. That's is why Italians talk with their hands. It's been downhill ever since.