May in Italy: Rules for the Road

This May, Italy took a few steps forward on its march toward user-friendliness – something good for residents and tourists alike:

- FREE PARKING The City of Rome lost a lawsuit pursued by the consumer associations (a miracle in and of themselves) regarding the famous ‘strisce blu’; the blue lines defining pay parking all around town. Ignore the meters in bliss. They don’t want your money. (And, wonders of wonders, those millions of parking tickets will also be reimbursed! So, it really is just like in Monopoly). 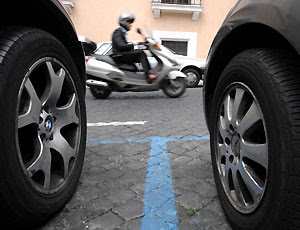 It was seconds before the word on the street was that the City did not really care whether they lost the case or not: Turns out, the wife of the mayor’s rival, Rutelli, owns the concession and pockets 22M euro of the 27M earned annually.
Although something must be said for the increase in smog, traffic, and once again, the cost of undoing what's been done (they're busy taking down the parking meter signs as I type), no matter, we consumers win out on this one (but, enjoy it while it lasts)…
- NO LOITERING Florence & Assisi have spearheaded initiatives to rid Italy’s most beautiful (and most visited) places of beggars.

Unfortunately, these spears are double-edged: it also means you can’t take in the sun, eat a sandwich, or read a guidebook whilst near the monuments either. We’ll see how it’s enforced.
Naturally, the Vatican chimed in on the right of the poor to collect alms.
No problems there, but, as a friend pointed out yesterday, one guy who goes up & down the trains to Salerno asking for handouts rents in August the lawyers’ beach apartment next door to hers…

Venice took a bold step and revoked the vendors’ licenses of those who provide bird seed for the pigeons in St. Mark’s Square. The vendors complained that they provided a tourist attraction service, and it’s unfair. And, while I commiserate for those who are losing their livelihoods, I kind of agree with Woody Allen on this one (that pigeons are merely rats with wings).

Of course, if they hadn’t gotten rid of all the cats the city wouldn’t be so inundated with the tons of bird poop to clean off its squares and buildings in the first place.

Are you saying that parking is now free everywhere in Rome? No more meters period?

That whole system of the little machines where you bought tickets for your windshield? Gone? (you are first to report this - couldn't find anything through Google) I actually was so surprised how efficient that all was and now of course, I get it. A well placed politico was making all the money, and doing so efficiently - that makes perfect sense, Italy-wise. What I don't get is that the bulk of the parking money didn't go to city coffers - sorry, how silly of me, I rephrase - how is it that Rutelli's earnings on this was not one of the #1 topics of complaint all along?

some of the 'wild' parking stopped when the blue line came in. there has been a bit more orderliness. don't misunderstand-- drivers still double park and block traffic but you don't see cars parked on sidewalks and ped zones, anymore. i am wondering if it was the blue line parking that forced romani to change ...or was it the threat of a ticket from those merciless unofficial vigile?c.

Getting rid of the parking meters is ridiculous. It stopped people from coming into the center and actually created a semblance of neatness in parking.
Now it'll be chaos as always, and those of us who live in the center will have to suck it up- in every way!
Another stupid move by the new government (like abolishing property tax). What the hell is this city going to run on in terms of money??????

To Anon #3: What money? If la Maggi is correct - and I'm betting on her - apparently it was all going to Rutelli! The difference between the 27m parking gross and the 22m net in Rutelli's pocket is 5m which was most likely bribes to whoever issued the concession rights, so don't worry, by my calculations the city won't be out one centesimo. But the parking and traffic congestion al centro IS going to be more miserable than ever, of course.

As of today (June 5th), meters have been reinstated in the City Centre...much to the satisfaction of the residents. But, go to town everywhere else!

As of the 5M in the city coffers, it probably cost them 7M to enforce it (all those vigili), so, like Anna says, the city needs to give La Palombelli (Rutelli's wife) the boot and take it over more profitably.

In the meantime, I too, am guilty of wild parking these days, knowing those vigili aren't lurking about...

I was talking about cutting ICI (the property tax).

Ah, yes, the ICI abolishing promise and our "tax-cutting" friend the psiconano, Silvio. I'm betting this has something to do with giving wealthy campaign contributing landowners with multiple properties a break and taking it out of the poor slobs some other way. One thing we can be sure of, this is NOT about helping homeowners. The local pro-Silvio fascist government will find a way to compensate for the lack of property tax, and it won't be pretty for the regular folk. Like quadrupling the cost of public transportation or something else completely non-sensical but designed not to impact the pocket of Silvio and his friends.

It was easier living with the Mafia than with this, I think. Now the government is worse than the Mafia - what do you know, that whole mafia-sweep of the 80s and 90s was really just an old-fashioned gang-war in sheep's clothing!