A few people have asked me to weigh in on the Olympics, although I must say, I was so proud of the Italians that I really didn’t have a barb ready and waiting to put fingertips to keyboard. Proud, first because our athletes were so awesome. And I didn’t care about the medals. The coverage of their stamina, their training and dedication was awe-inspiring, especially the women.

Every four years you can look forward to a split second in time when women are on TV, yes, still scantily dressed (just take a look at the beach volleyball teams), but revered for their prowess, their acumen, their commitment. The sportscasters get it, the country gets it, so why can’t it last longer than a few weeks?

But, these Olympics are even more awesome when one looks around the country and thinks… they have athletes here? (soccer players not included, of course).
No class of citizens here called Soccer Moms (for which we are all extremely grateful), no after school sightings of kids in jerseys, and certainly none of those thick football player necks and skulls and perky cheerleaders (although with the obsession of eye candy, I'm not quite sure why this hasn't caught on). I remember years back when I lived in Parma, they had the No. 1 baseball team in the country (yes, baseball). Almost everyone on it was American. 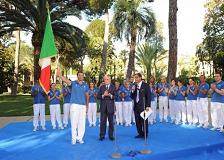 Another reason I loved the Olympics this year was the age of some of the players. Although I’m partial to having non-professionals compete, I was thrilled that some of the leading teammates were pushing 40 or more, which made them about 5 times the average age of the Chinese “women’s” gymnasts. In what is just about the oldest country on earth, and despite its obsession with youth, this was yet another inspirational feat.

But, the real reason why I love watching the Olympics in Italy are the newscasters. They show an extreme love of the sport, the game, the players. They are not cheerleaders like in the U.S. They analyze moves, strategy, the competition. Italy was just as thrilled by Phelps as if he had been one of their own. The screens split and show us other games, and not just those focusing on Italians.

But most importantly, they spare us the ridiculous sob story blather that plagues reporting in America: “Did you know, Mike, that Julie once had an ingrown toenail so bad, that, if it had ever gotten infected, she might not be competing in the long distance today???”
Italy garnered some well-deserved medals. But they get the gold in reporting.

I was less thrilled with the tv coverage. By chance, did you watch the nightly wrap up? It stunk... Each eve there was a panel of 4-6 experts ---who never had a chance to speak! Go figure.

You are right...coverage did include SOME events where there were no Italians. So, I got to see the US Redeem team win the gold.