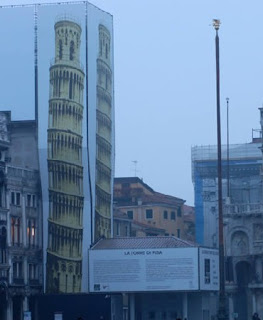 One of my most favorite columns ever pre-blogosphere, that is, was the article by humorist Dave Barry on his trip to Italy. I still have a copy of it as it nearly killed me with laughter. It was mostly about the Italian drivers he came across during his holiday, but he also stated something so obvious I had never thought about it before:

August is a time when everybody in Italy goes on vacation – including the statues – and every building seems to be wrapped up, under restoration.

It's true: every July, for some strange reason, builders across the boot are busy as bees putting up scaffolding and tarps across pretty much every façade in sight. They give one hope -- a nation intent on showcasing its cultural treasures for all the world to see. But come August 1st, they only call it quits -- leaving the tourists with a cute little ‘Name that Palazzo’ game to play over their summer holiday.

I can’t figure out the rationale, other than getting set to go come September. But, once again, in a country dependent on tourism, you sometimes gotta scratch your head in wonder.

But, applying my own little conspiracy theory…from the looks of it, it would seem that while the workers may be officially on holiday, they’re all double-dipping in and around the very scaffolding that should be as still as a humid Milan summer’s night. Because come fall, when work resumes, and they eventually rip down the tarps, neighbors who once had a perfect view of that dome in the distance, now see a 4 bedroom party palace for some amico or another of some unnamed City official.

I suggest someone start making those groovy little books with the plastic drawings overtop so you can see what the Building looked like before August, and compare it to what it looks like now.

picture of Torre dell'Orologio in Venice's St. Marks Square, designed by famed photographer, Olivero Toscani who obviously figured, if they can bring Venice to Vegas, they can certainly set Pisa in Piazza San Marco