The End of Ignorance

In the words of Gaius Giulius Caesar, I say to Barack Obama, Veni, Vedi, Vinci.


It is truly rare in one’s lifetime to experience history being made. Talk to your grandparents and you will hear – no feel – the emotion of watching man taking his first footsteps on the moon, children being given chocolate bars as American troops marched down the streets of newly liberated Rome, the end of Marcos in the Philippines, the literal breaking down of the Berlin Wall. And you could always count on those who would bear witness to these earth-shattering events to understand and convey with a mixed sense of euphoria, eloquence and even gravitas worthy of the event to others who had not the privilege of seeing it for themselves. Naturally, we turn to our leaders.

“What belongs together is now growing together," former West German chancellor Willy Brandt eloquently surmised for the world to hear on November 10 1989, the fall of the Berlin Wall.

Armstrong boldly declared: "One small step for man, one giant leap for mankind."

At midnight of August 14, 1947 Pandit Jawaharlal Nehru, India’s leader, delivered his now famous “long ago we had made a tryst with destiny…” on the British withdrawal from India.

And Winston Churchill stated, after the Battle of Britain “Never in the field of human conflict was so much owed by so many to so few.” 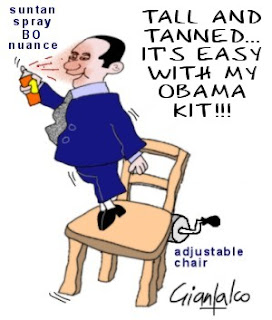 And so it is with great dismay and deep disgust that we heard from Silvio Berlusconi, former nightclub singer and now Prime Minister of Italy remarking on the historic election of Barack Obama, the 44th President of the United States of America. And while it’s true an ignorant quip is more representative of the speaker than of the person being spoken about, sheer ignorance upfront and center still can feel like a slap in the face.

It is no wonder that Berlusconi loves to flaunt being buddy-buddy with his other verbally and intelligence-challenged comrade in arms, George W. Bush (who so eloquently expressed Obama’s landslide victory using the adjective of a brain dead teen on ecstasy…“awesome”).

Berlusconi, head of the 7th largest economy in the world, while standing at the side of Russia’s new premier, says he was “just cracking a joke”. Certainly, if his name had been the byline as a reporter for Jon Stewart, or for the political satirical website, 23/6, or as a writer for SNL or even Striscia la Notizia, his line was “awesome”. Just take a look at these day-after headlines from the top satirical reporters in the USA:

Barack Obama has been president-elect for two days yet my cancer isn't cured- WTF?

Presidential dog not leaving his White doggie-house without a fight

Barack Obama: Young, handsome and even tanned!
[Berlusconi on what the President-Elect brings to negotiations with Russia]

Now that there is a highly intelligent and articulate man in the White House we can finally go back to Statesmanship as it was intended. To a day that when world leaders speak, people don’t have to sift through the rubble of their garbled sentences to find the significance; To when we no longer have to see someone like Boris Yeltsin peeing himself on the tarmac, a place where Cabinet Posts aren’t thoughtfully based on the sex appeal of the occupants as if running the Playboy Empire. Hopefully, we will now find ourselves in a time where gaffes are not excused as ridiculous slips of the tongue but are accurately and vehemently called out for demonstrating the pea-sized brain of the person who has uttered them.

The symbolism of an unknown Senator from Illinois, Abraham Lincoln, who, after having put an end to slavery, uniting the States, has been oft-quoted this election cycle. Known for his gift of elocution, and his firm commitment to his beliefs, I leave dear Berlusconi with this message, that you may reap something from his sage words:

“The time comes upon every public man when it is best for him to keep his lips closed.”

You can read what real European leaders said about the Obama victory here.

What's missing from this blog? The disgusting quote that inspired it! Did you exclude it for a reason other than maybe you did not want to repeat it (though you kinda did with the last day-after headline)? Perhaps I am being dense?

Change has come to America. Very few Italians are still hoping the same can happen to them. P

RIGHT ON, FRANCESCA!! I love your prose, especially Bush and Berlusca as "verbally and intelligence-challenged comrade in arms," and totally love your wish that "we will now find ourselves in a time where gaffes are not excused as ridiculous slips of the tongue but are accurately and vehemently called out for demonstrating the pea-sized brain of the person who has uttered them"!!!

I'm so happy that for the first time in 8 years I can once again be proud of the government I represent.

I'm hoping that Bush's "Trickle Down Theory" will also trickle over to Italy and other places that oust the idiots from High Office (and that includes the Governor of Alaska).

"A Daniel, still say I, a second Daniel!" Maybe?

Socialism is not for the USA, Rev. Wright, William Ayers, and George Soros not withstanding.

Woe betide the Democrats if they can't resolve the economy. It'll be hung around their necks named the millstone of "change."

Dave - this post isn't pro-anyone. But, if you're going to post things, you might want to consider the ignoramus in chief who has put the noose around our necks to begin with (and I don't mean just the USA) - try global depression.
Wright-Ayers-Soros et.al., have nothing to do with the election nor the elected nor truly anything to do with the last 8 years.
My post is about history in the making and the sheer stupidity of our "leaders". Go watch a few episodes of Letterman's Great Moments in Historic Speeches to give yourself an idea...