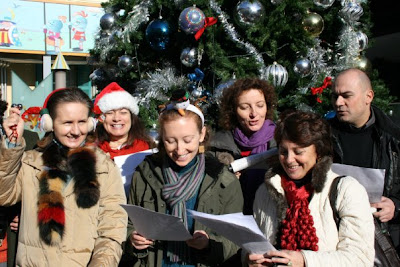 Each year, members from the American International Club of Rome (AICR) gather to sing Christmas carols for all well, make that some of, the bambini at the Rome Children’s Hospital right by the Vatican; appropriately named, Bambin Jesù (Baby Jesus). The group delivers gifts to the kiddies and even a few of the tots dance along with the tunes.
This most traditional of events, however, did not come without its own security apparatus fit for the coordination team of a sitting U.S. President. Basically, the revelers were not allowed into the corridors of the hospital; we could only gather in one of the main areas, where the kids who were well enough to walk could come and listen (chaperoned, I'm sure). Although it makes some sense, I mean, we could bring the gift of incubating flu to fragile patients, or take a kid under our coats as a sort of free gift...I still feel that the spirit of wandering mistrals was lost on the general hospital populace.
So, when last I joined the merriment, out in the sun-beaten area replete with a glorious Christmas tree we were.  It was probably the nicest tree I’ve seen in a long time (London included).  But it was mostly for the staffers:  the children weren’t allowed out because of the inclement weather -- after all, it had been raining for days.
The group was actually informed that they couldn’t wander the halls, obviously for the protection of the kiddies, but also, because the doctors were doing their rounds and, lo and behold! Because the children were, in fact – sick.
So much for spreading good cheer. Next year maybe we should just send pre-recorded tapes in sterile bags instead.

What a shame for the kiddies. Healing doesn't always come in the form of medication.