As I reflect on the past year, I would like to first and foremost thank all of you dedicated readers (and commenters) of my blog for your patronage...it's nice to know that I am not writing for an audience of one, and that every so often I can bring a smile to what sometimes seems like daily trials & tribulations of life in this wonderful country of contradictions. I'll be making a few changes in the New Year, but always appreciate your observations (be nice!) if you'd like to see more / less of something or other.

Anyway, for what it's worth, here is my short list of Bellissime Cose del Bel Paese... and the not so terrific (in no particular order).

The worst? Any reality show and the Veline on the omnipresent 1970s-style variety shows.

- Il bello: The Metropolitan Cinema in Rome and its dedication to English-language theater.

The worst? The demise and troubles behind the singularly fantabulous Spoleto Festival di Due Mondi.

The worst? Having to stomach the constant bickering behind the Venice Film Festival, San Remo Music Festival, the running of the RAI and pretty much everything that gets politicized unnecessarily.

- The hope that the political wind change will bring about real change.

The worst? The occupation of Naples by troops for garbage removal.

- Il bello: The rise to the head of Confindustria of 'The Woman of Steel'.

The worst? That Italy, along with Portugal, has the lowest representation in Europe of women in business (although that figure must leave out the thousands upon thousands of retailers and hair salons). Just ask the ex-model and Equal Opportunity Minister to address it.

Even worse? Alitalia still flying the unfriendly skies and all the related strikes, baggage losses, and see-sawing which has marred the takeoff of CAI.

- Il bello: The U.S. Government, in the persona of our most excellent Ambassador Spogli, trying to promote Venture Capital as a stimulus for the economy.

The worst? The departure come January, of said Ambassador

- Il bello: All the wonderful ezines, blogs and websites dedicated to Italy, including Life in Italy, Italy Mag, The American - in Italia, Italy Travel Guide and the people bringing you the best of Italian culture, along with those who dare dream of change, like Beppe Grillo and the thousands of bloggers who attempt to post the problems...if for nothing else, than cathartic release.

- Il bello: Italy's Associazioni Consumatori in all their various guises, finally giving a voice to the downtrodden and getting results.

The worst? All of the store and restaurant owners who keep jacking up the prices so that pasta is now 2500% markup and plain old pane has gone up nearly 40% in the last year. 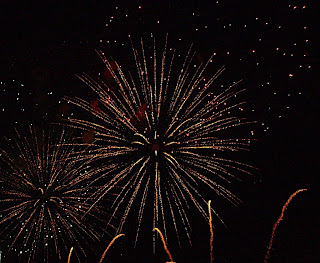 - New Year's Celebrations with spectacular fireworks displays, along with some excellent Prosecco...

Please feel free to add your own below.

enjoy reading your blog... am wondering what changes are in store.

I really do not understand how you are able to survive the inefficient and overly complicated bureaucratic italian system...

As italian I cannot stand it at all...