As we’re all swept up in World Cup fever (mostly brought on by those incessant horns which provoke the cessation of all brain activity), in Italy, and in most of Europe, news from the World Cup action is vying for headlines with the belt-tightening measures across the continent.  Perhaps because of those cacophonic horns, I have blurred the two news stories into one – and therein lays the solution of Italy’s economic woes.


In short, if Italy were to run their country like they run their soccer teams, tattoos & all, the country would be a winner on the world stage.  And to think – we wouldn’t have to invent it, we could just copy the game plan from their most successful format – football.

- Merit / First and foremost, soccer is a meritocracy.  Only the best players ‘make it’ and, once at the top, are rewarded handsomely for their trouble.  Take a look at Italy’s education system, post-graduate jobs, or any career paths and in Italy, this is simply not the case.
While there are certainly exceptions, overall, in Italy you get the job from a ‘recommendation’ (read nepotism, political favours, family ties, or worse). Once in, you rarely have career upward mobility based on performance (unless of course, you’re an Agnelli and then you get to run the company entirely despite having a resumè which can only delineate the number of pistes you skied in San Moritz combined with the number of champagne bottles you uncorked by the age of 25).
- Ageism / While Italy bemoans its ‘aging’ players, soccer is a career filled with young people working their butts off in order to score big.  The average age of our World Cup team, largely with guys who actually don’t go home to mamma each evening, is well below the average ‘bamboccioni’ – the Big Babies who don’t manage on their own until well into their 30s.  The Bonus?  And this should be incentive for any number of Italian boy-men -- they get to hook up with hot babes without having to go to a car because mamma’s knitting in the next room.
But I digress.  The key here is that young people are allowed to perform at their peak in order to obtain results for the good of the entire organization if not the entire country.  You don't find on the football field too many octogenarian feudal lords like the ones who dominate business, politics, the media, arts, sciences, universities – heck even the mafia - across the Bel Paese.

-       Money / Soccer is the most monied sport worldwide – and it shows.  Imagine what can happen to those trillions of businesses in what is a country absolutely exploding with ingenuity, creativity, and entrepreneurial spirit.  By putting money with talent, an eye to the consumer (the fans), transparent attempts to not operate at a loss, they still having something leftover for the politicians.
If businesses – hospitals – schools - transportation in Italy actually used the money to invest where it counted (attracting good talent, building a team, marketing itself, competing internationally…) how far would Italian enterprises go?  The sky would be the limit.

[note: This is not to say they sit & wait for the nanny state to give them a handout – one of the most prevalent business strategies in place today].
-       Customer Service & Satisfaction / With the fan clubs, t-shirts, trips, TV, you name it, the fan base is appreciated and the teams show it.  These are not companies who take your money and then don’t show the game, or don’t even show up for the game.  The relationship between the Clubs and their Fan Base is a virtuous cycle of goodwill, money exchange, emotional branding, and a whole host of factors from which Alitalia, Eni, Telecom, and myriad companies littering the boot would be well-advised to pick up some pointers.  They could start small - by mimicking the soccer club phone lines.  I'm fairly sure if you call in, you can actually purchase tickets or get fairly accurate information on game times. Try that with any company, and you're on hold for 20 minutes while being forced to listen to music that makes the S.African horns sound like a symphony in comparison. 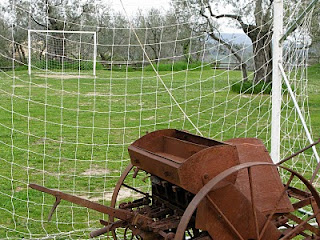 Italy - don't let your time worn ways get in the way of scoring big
-       Security / Ahh, the fan base – some are violent, and ruin it for the rest of us, right?  Well, you haven’t seen security like you have at the stadiums.  The public officials work wonders, do their jobs properly, nab their criminals and generally keep the peace.
Wouldn’t that be amazing if this most basic of law enforcement could be applied across the streets of our fair country?  Instead of taking bribes from transvestite whores and mafia peons, or handouts from every enterprise from Parmalat to your corner pizzeria cooking its books, Italy would start to look a lot like Singapore.
-       Free movement of labor / Looking at our non-World Cup teams, you see that soccer is a highly democratic sport.  Africans go literally shoulder to shoulder with Italians, Argentinians, British, Brasilians… How much talent do we let go to waste by not allowing other fields to employ their labor due to the color of their skin, or their religion?  Or, just because you're French and can - in theory - work in Italy, doesn't mean they'll hire you (and, for the record, vice versa).
-       Planning / It’s pedestrian to state that Italians are organizationally challenged.  And while our Italian World Cup coaches (Italy/UK) didn’t announce their lineups til the last minute, I like to think that’s more likely a strategic move versus a lack of basic planning.  But the plays, the year round training, the techniques, and back again are what make our teams great.
Instead, it is a rare company who actually spends the money and time to train its employees, never mind the ones who might be sitting on the bench most of the game.  Training these people up, providing incentives, and putting them on a road to career success -- and allowing them to implement what they've learned -- There's a TV with a soccer game on nearly 365 days a year in households across the country.  Why this practice hasn't rubbed off onto the proletariat is beyond me.
-  Team playing / Italians love to quip that they're a country of 'individuals' - all 58 million of them say this in chorus.  Anyone who has ever stopped at an Autogrill at 1pm or, tried something extreme like laugh out loud at a movie - knows that there's a not a lot of truth to this.  In reality, it's code for 'egotistical'.  And while young boys learn the team ropes early on, for some reason, their soccer skills have no further relevance the moment they take off their cleats.

Watching the US team play in the World Cup was like watching a bunch of 4 yr olds. Never passing, hogging the ball, and when they did kick it away, it was inevitably into a group of British shirts.  Look at the Italians, and that was soccer as Dio commanded.
I can't help think what Italy could achieve if those kinds of moves were put into play - from dividing your trash for the good of the community, to working with new people instead of the old guard to achieve amazing results.


But for now, I’ll have to sit through the mind-numbing horns to see if the Azzurri – by implementing the finesse of team tactics – take South Africa by a storm and brings home the Cup.
If it happens, the wild revelry in the streets will be awesome – but certainly, put these plays into practice and Italy would win more than a World Cup trophy – and the celebration would last for generations.
And if not, maybe we should all start importing vuvuzelas to drown out the sound of our own autogol.

I liked this analogy.

Considering how the world cup went for Italy, can we have a full recantation of this article? :)