Your Guerrilla Guide to taking Taxis in Rome 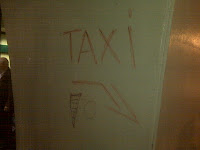 1.             If some bloke comes up to you in an airport, uttering ‘Taxi-Taxi’ as if he’s about to sell you a kidney, it’s best not to take a ride. He’s illegal.  Go to the regular – authorized – white cab stand just outside the airport.  You’ll know you’re in the right place when you see the handwritten sheets of paper taped on some of the signposts there.  picture from www.Romafaschifo.com

2.             Right now, the tariff from Fiumicino (aka Leonardo daVinci) airport is at 48 euro fixed price, including tip & bags (extra persons about 1 euro each).  This is the case if you are traveling to the City Center (or, inside the Aurelian walls, as if newcomers to Italy know what that is).  If you’ve passed an immense brick wall with huge archways for cars to pass under, chances are, you’re inside the walls.  Going anywhere else, the fee is what’s on the meter.

The fee is 30 euro from Rome’s Ciampino airport. It will be printed on the side of the cab [A huge improvement from the days of printing it on a sheet which the cabbies just updated and placed in seat pockets with the tariffs of their choice - A practice you'll still find in Naples]. When you arrive at your destination, just know that drivers will regale you with a thousand excuses why it’s 60 euro or more. Take the advice of Rome Explorer, and do NOT pay a penny more.

3.             So, before you get in the cab, note the medallion number on the outside door of your taxi – copiously -- I personally like to take a photo with my phone.  Rome is quite serious about weeding out the thieves.  Any question over the cost of your ride, don’t pay it and call 113 for the police.

4.             In summer, ask first if they have air conditioning = aria condizionata.  Generally, they'll say ‘It’s broken’ (each summer, there is such an epidemic of broken air conditioners in taxis, you’d think by now all Taxis would have been recalled).  You can take another taxi and let that guy sit & sweat.  This does not, however, signify that the taxi driver then turns it on much, often leaving a window open so they don’t catch cold.

5.             Or, to avoid this entire hassle, book an airport transfer - private car or minibus with www.DriverinItaly.com or take those groovy fast buses that wizz you into the City Center.

But if you take a taxi from Rome's central Termini Station, there is now a 2 euro surcharge just for the benefit of picking up a white cab out in front.
Note: I avoid taxis - worldwide - at all costs so I do not recall if this little regulation is written anywhere (save for a tiny sign stuck to a post somewhere) but I have since found confirmation:  The doorman of the Hassler Hotel also confirmed it, but he’s most likely in cohoots with the taxis…

Taxis in Italy: Ride at your own Risk.

It's an hard world for foreigners in Italy....

Well, I think taxi drivers - worldwide - have a DNA all their own. It's like out of Huxley's Brave New World...where we select a certain 'type' to come out of the test tubes - to become a taxi driver.