The City of Rome, Roma Capitale, for a few years running has almost always come up with excellent advertisements.  Whoever they have been using has outdone not only themselves but every other city in Italy for the wit & wisdom behind the public service announcements.  That's why I was absolutely stunned to see this ad clearly invented by a  fifth grade classroom posted around town, sweetly promoting the idea that your dog is your buddy.
This year's advert was more in line with a campaign to adopt one of the thousands of dogs overflowing the dog pounds around town versus that of a guerrilla campaign against the thousands more despicable assholes who this year will leave their little furry friend at the side of the highway to face certain death-by-bumper.

Instead, Florence took a better approach with signs all over town of a cute dog (too bad he was a cartoon), with the signs reading:
If you abandon your dog, you're the Bastard!

Too bad, both get total ad fails by not putting these ads right front & center on the home page of the websites.  You have to dig & dig until you finally find the ads on the web (and in Florence I never did).  Here's a close one done by a group of militants in Perugia. 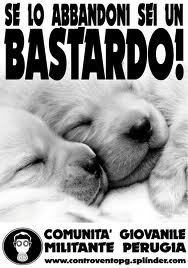 Whether any of these campaigns make one single bastard think twice is yet to be seen.


For more of my annual reads on this atrocious practice, click below:

After living in Italy in my mid 40's between 2002-2006. I often repeated to myself the words "illusion" & "delusion". Yes there was beauty and I appreciated the time with my relatives, however many other things I found quite disturbing. The callousness when it came to caring for pets was one of the things at the top of my list.
Celebrating Ferro Augusto (assumption of the virgin Mary) by dumping ones family dog in the mountains or on the autostrada.
My, my the hypocrisy of it all!

Francesca:
Second to this is the Roman if not Italian disgusting habit of leaving dog poop on the pavement. What kind of manners were these bastards taught...NONE!

As pointed out before, Italians don't have the market on this...In France its an annual massacre, and I can imagine in Spain & Portugal as well.

Americans, I'm told, with the recession have abandoned their dogs with ease...

As the Italians like to say, Tutto il mondo e' un paese.