Rome's Metro: Not a pretty sight?

I don't take the subway - or underground - around Rome, and generally, not around most places because I like to actually see where I'm going (except Milan, and then, well, it's better to be underground). And I seriously don't dare go into the underground in the summer, when I understand that it starts to resemble a trip straight to Hades.  But, I was curious about the opening of Rome's new subway extension, part of the METRO B line, inaugurated in June by our Mayor Alemanno.  Although the stations it serves look mighty spiffy, it's been paraded out all over the press and internet as the symbol of all that doesn't work in Italy.
First off, to build those spiffy stations - three, to be exact - it took seven whole years.  I'm not sure if that's going at a good clip or not, but certainly, lots of public works are held up because of archeology digs.  And when we consider that in thousands of years we've only uncovered a third of Pompeii, well...you do the math.
Turns out, since it became operable, on June 13th, the metro has also only been running successfully for seven full days.  Last Thursday's delays were due supposedly to a track switch engineer out on vacation - that was actually the message that the ATAC metro people put out on its loudspeakers.  Gotta love a place which puts holidays above customer service - so, I was all for it.  But again, I wasn't one of the people trapped for two hours in the bowels of the earth.  On Friday, it was a general strike which is actually, business pretty much as usual, so no one was caught out.
Perusing one of my favorite sites, www.romafaschifo.com [a hugely popular site called 'Rome Sucks' and attracting the attention of politicos and legal offices threatening defamation at about the same rate], I was amused to see the pictures of the inauguration.  Of course, the photo opp in the press showed a sleek new train and stunning stations just in time for the ribbon cutting. 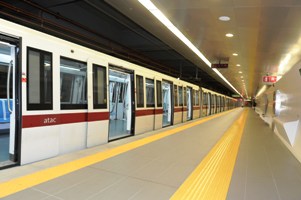 If I am to believe someone's post with regard to the cars of the Metro, this line has 39 cars; 8 of which look like the above, also mercifully sporting air conditioning.  Of the remaining 31 cars, 2 were restyled on the outside, and 1 totally revamped.  So, the remaining 28 present themselves a bit more like the cars we ride in day in/day out.  Rome doesn't have the corner market on graffitied up cars, scary stations, and un-airconditioned vehicles, by any means.  One post even went so far to claim that for just €1.50 you can catch a ride back to New York City in the 1980s!!  But that was a small price to pay in NYC to have trains running 24/7.  I noticed in Barcelona, they were uber-amazing as long as you rode in & out of the airport and around the central city.  Trains to the suburbs were a bit more shabby, indeed.
In any case, I did get a big kick out of our photographer's point of view as to the trains rolling in & out of the station on inauguration day  (click on colored section above for a stream of fun pics!)  Too bad for the riders, the free-flowing of cool (or rather, hot) graffitied cars didn't last long enough to catch anyone's attention.  To mirror the transportation fail, the head of ATAC, making over half a million dollars per year, gets to stay put as well.
Instead of fixing the problems, ATAC every now and again is happy to supply bandaids for their client's misery:  they hand out bottles of water to the poor souls who lose half their body weight just trying to get from point A to point B. 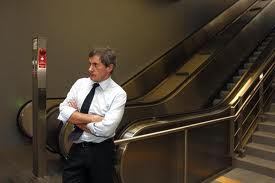 The Picture of the Day Win for me?  From www.paesesera.it
Our Mayor Alemanno, looking a bit p'oed over having to wait on a train...

LOVED your blog on this one. The part about making the announcement as to the reason for the delay made me LOL!