Italy: Out on a Limb? 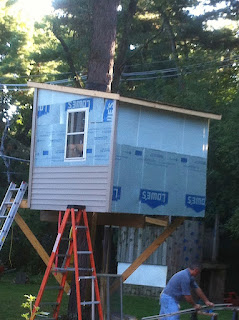 Back home in the Midwest, my brother-in-law and his kids were busy sawing, hammering and installing away to create a modern treehouse to suit the tastes of an 11 yr old who wants to host sleepovers inside there.  Naturally, in cool Michigan, that includes installing insulation, a word that can barely be translated into Italian (but that's a whole 'nother blog entry).  Beavering away, their work came to an abrupt halt.  A neighbor, who could not see the fortress from their home, complained to the Board inquiring whether or not they had applied for a building permit.
Because they did not consider a tree fort a building, in reality, they hadn't even looked into it.  Building on their own property, creating only an eyesore for their very own BBQ parties...they're hoping they'll pass the City Board approval with flying colors.
And, although it seems like a bureaucratic piece of nonsense, I still say, it's a good thing the neighbors snitched.
In Italy, each August, new constructions go up right atop of historical buildings, new floors are added that block your view (illegal in Italy), or a neighbor decides to expand right up to your property line.  And the neighbors do complain.  The problem is, like almost every other law in over-burdened by inane & sane laws Italy, it won't get enforced.
A group of people near Santa Maria Maggiore complained about a whole new floor added to a building during the time the building was under wraps for a repaint.  They won in court and the perpetrator was told to knock it down.  That was about six years ago, and the addition is still left standing, used for hosting parties and more on the fabulous terrace with a view of all of Rome.  The owners drag their feet, waiting for an amnesty under a new govt so they can carry on partying it up--up on the roof.
They may feel the pain only should they try to sell (not a very common occurrence since these structures are built for bambini and their future offspring).  Up and down the historical park of the Appian Way, illegal constructions are the order of the day.  You can buy one of these luxury houses with pool too.  The problem is, if you're caught, you've paid for a property that one day might be taken down or fined tremendously.  This practice is rampant throughout the country, with an excellent writeup on the over-cementification of Italy in The Dark Heart of Italy, a book by Tobias Jones [check out my reading list on my blog page as well].
But, let's go back to my American example, above.
What I have never been able to figure out is...why don't the neighbors complain?  I believe it's due to a noxious combination of omertà and a sense of 'sticking it to the authorities'.  Whenever there's a flood, an earthquake, and other such natural disaster that takes with it dozens of homes, we find that the entire country sides with the populace who had built the illegal places to begin with, disregarding the building codes that are in place, precisely to protect them in the case of disaster.  I say, like the losers who build homes on landslides in Beverly Hills, let 'em suffer.  Why should we pay for their illegal edifices?  Just take a look at the thousands of houses nestled in on the foothills of Vesuvius, a live volcano, to see the extent of the cognitive dissonance governing both 'Doing your own thing' and 'Laughing in the Face of Danger.'
What people don't seem to understand is...when 28 new illegal constructions go up in your neighborhood, and left in various states of unbuilding, disrepair, or worse (no garbage collection since they're not on the grid, etc etc), your property value goes down.  When neighbors don't put on paint, or use cheap materials for their window fixtures, your property value goes down.  When garbage piles up and immigrants are sleeping 10 to a room in illegal huts a stone's throw from your bathroom window, your property value goes down.
And yet, the practice persists.  When stores in charming little areas, akin to the Baltimore SeaPort, or New York's Southstreet Seaport go out of business, or, as in many a shopping mall (centro commerciale) or Genoa's Porto Antico, let the plants die in front of their shops or let the paint peel off the storefronts in sheets, it detracts from the rest of the area.  Yet the other property owners don't make a sound.  Other places levy steep fines and tell the storeowners to hit the road.  By doing your best to keep up the area, you're contributing to the value of the surroundings while adding to the experience of the visitors.  Instead, after great fanfare, pristine shops and pedestrian promenades are left to ruin, wooden boardwalks are left in pieces, nails exposed for your kids to tread upon, trash and graffiti pile up..I cannot for the life of me think as to why the shop owners or the visitors or the neighbors still don't complain.
If anyone can offer an explanation, I'm all ears.

Amen! Great post. I've always wondered about the lack of complaining (constructive criticism)in general in Italy and I firmly believe that if more people complained, things would change. But at the end of the day, what it comes down to is people don't care.

Say you live in Naples or any southern town. There is an illegal building. You complain. You die...and wonder why.