Life in Italy: A Case History

Now, we know that for five years and running (a heartfelt Grazie! to all my readers), all of my blog posts and the excerpts in my book are truly Case Histories of Life in the Bel Paese.  But I have decided to offer up a few slightly more 'practical examples' of the trials & tribulations of life in Italy (like the post on getting your driver's license), above and beyond my casual musings of the buono & the brutto.  I will also be creating a tweet stream most likely to let off steam of the daily inconveniences in the country that does its best at marketing and exporting its unparalleled Quality of Life.   Naturally, I will also tweet and continue posting about the over-the-top wonderfulness that comes part & parcel to Life in Italy as well.
------------------------------ 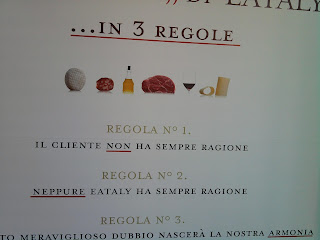 In the Prologue of my book, I wrote that one of the main features of Life in Italy was a lack of recourse.  This is generally the case when dealing with public offices or almost any retail store for that matter.  The unwritten rule (that Eataly - photo above - actually chose to write) is, "The Customer is Never Right" - an entire chapter in my book.  So, I should not have been surprised when WellnessTown, an otherwise superb Roman gym - one of the best on earth (excepting for the fact that they refuse to install drinking fountains) fell short - yet once again - when it came to providing the service I paid for, e.g. use of the facilities.
WellnessTown, in short, is nothing less than the brick & mortar equivalent of Lucy, holding the ball out for Charlie Brown to punt.  Always holding out that promise, season after season, that 'this time, things will turn out differently.'  And year after year, I fall for the same trick.
When I first joined the Technotown gym years ago, they had building materials in the huge exercise equipment room.  For years, they would tell you when you were signing up (forgetting that you might have heard that old yarn before) that they were "in the process of building a sauna & massage area" as well.  It never happened, and eventually, probably because it was a violation of safety rules & regulations, the props were removed.  That doesn't stop their saleswomen from spinning that line to newcomers even today as they get them to sign on the dotted line.  Another rule from my book:  Caveat Emptor.
Technotown finally went belly-up (in the very Italian world of not providing customer services to stay in business, but relying on shaking down the clientele as much as you can before you go out of it) and with it, so did our memberships.  Partly owned by the City of Rome, it was rechristened within months, WellnessTown, and the doors were opened widely.  Drawing from the Italian Manual of Customer Service, however, and in a bid to ingratiate yourselves to the thousands of shafted past members, naturally, after our workover, none of our memberships would be credited to get us to come back in for a workout.  For me, this meant going elsewhere.  A loss to them of about €700 ($885) per year, and I'm sure I wasn't the only one.
I rejoined for the yoga, rolling my eyes when they told me the one about the massage area Coming Soon, since WellnessTown boasts the best instructor on the planet, along with all their other instructors as well.  As usual, the individual Italians are infinitely better than the institutions for whom they toil.
But then came the Pool Membership (aka I've got a bridge to sell you...).  Each year, WellnessTown opens up its gorgeous pool area, removing the overhead tarp so we can all enjoy a few laps in the sweltering sun.  It is seriously the city's coolest diversion in one's otherwise sweaty summer existence.  The process, however, takes a few weeks to open it up and a few weeks more to close it.  Simply put, if you happen to have a 'Swim Only' membership, you can't use the pool.  What's the big deal?  Surely, they'll credit you the days that you can't swim.  NOT.  Years back, I found this out the hard way.  After I protested, I was told 'they couldn't do anything about it,' and once again, I withdrew my membership.
This year, I decided to give it another chance.  I would just make sure to start my membership after the pool opened.
But before signing the contract, I asked about the pool closing.  I was reassured by Irene, one of the well-trained members of WellnessTown's less-than-honest staff, that in June, the pool had only been closed for a few days.  She said (and I quote, "Our members were upset by this, so now we keep it to a minimum and in any case, you can use other areas of the gym.").
The contract read that I would not be reimbursed days or allowed to recoup for manutenzione ordinaria (standard maintenance).  I consider 'standard maintenance' a cleaning of the filters, but, suddenly, I found out that for them that also meant a two-week closure of the pool come September.  So was I surprised when coming into the gym one day, to find a sign posted that for 'standard maintenance', the pool would be closed a full three weeks, one quarter of my membership.  An honest employee told me it was so they could restore the entire wooden structure; something that in my handbook is decidedly, 'out of the ordinaria'.  Upon protesting the situation, I was told in short order: 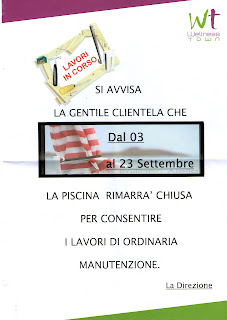 1)  The saleswoman would 'never have said such a thing' (e.g. I was lying - a common rebuttal in any instance, and one that I was told repeatedly by the entire staff)
2)  Go talk to the facilities guy 'cuz it's not their decision
3)  Go talk to head of sales 'cuz it's not his decision
4)  They never lie and the three week closure falls under, naturally, ordinaria manutenzione
5)  They were considering allowing us to recoup the time (a bald-faced lie, since we would have had to have been notified at the moment of closure)
6)  I'd need to talk to the owner who was unavailable at this time (read: never)
7)  My request to pause my (and everyone else's) swim contract until the pool reopened would cost them €15,000 (Huh?!!  I tried making the case that she might try adding up the years in lost revenues from me and a few others, but that line never works in Italy--there is a huge disconnect between people holding down jobs and customers continuing to give their custom)
And this is what I mean when I penned the fateful words in my book, No recourse for the weary.  Naturally, by not following my own advice and getting hotheaded while laying out the logical reasons why it's simply bad business not to give us the 12 weeks of pool use that we had contracted for, I assured that no graceful solution would ever have been found.
As a Case Study, to live in Italy, I needed to have:
a)  Made my case calmly
b)  Moaned and groaned about the inconvenience
c)  Showered them with compliments in what a great gym it was, and how pleased I am with them (which is generally the truth aside from the pool closure & lack of drinking fountains...)
d) Pleaded that they help me out here and e) Allowed them a Bella Figura moment of a face saving repeal.

The Italians have a great expression:  "He who 'loses it' goes from being right to being totally wrong."  It's no wonder Charlie Brown always just lied down on the football field in stark silence.  With Lucy's dark curly hair, she may have been Italian for all we know.

Oh my god, I feel for you. My blood boiled just reading this story.