As the press starts to state that Berlusconi's 'zipper problem' (my word, not theirs and borrowed from Bill Clinton) is beginning to be an embarrassment to the country - what with his penchant for paid prostitutes escorts, surrounding himself with underage cube dancers, and then not showing any signs of humility insofar as a father let alone the face of Italy's government.  I wonder sometimes, how deep this double (or in his case, multi-dimensional) standard goes. 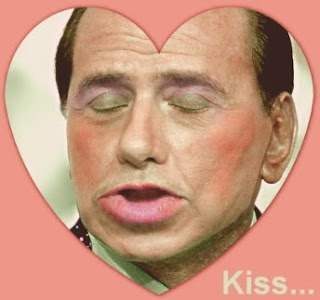 This picture comes with an excellent rhyme
(in Italian) at this website
This week, I was invited to a conference in Florence - for the Arts - an industry in which women are prominent (but mostly cuz it's so low-paying, like everywhere else).  But once again, to hear a bunch of guys rattle on - generally reading from their pre-prepared scripts unless of course, they're making ad lib sexist jokes.
Then, a friend told me of a meeting he had in Amsterdam - between all Italians also attending a conference.  Turns out one of the two parties was a pretty serious, straight-laced fellow.  The other party, in order to 'test his mettle' decided that they'd see what he was made of.  And so, the dinner quickly diverted to the Red Light District.  I guess, if he could bag a whore, he would bag the business.
This happens the world over -- in fact, escorts doing just their job is pretty standard fare anywhere -- but you sometimes wonder, where the dividing line between upright behaviour in business ends and PMs 'defending their lifestyle' as a model example of a successful businessman cum politician begins.
Perhaps Berlusca can turn the Zipper Problem to his advantage:  And start by zipping up his mouth.

Francesca:
Il Duce has a macho problem, coupled with the fact that he owns most of the media. He like some in this country think they above the law, or at least don't have to pay any attention to it. He's also a runt, which adds a large slice of the Napoleon Complex.

In the world's view, Italy is a joke.

Your're too funny. I think he's actually sick - But, now that he's single, I don't care what he does in his spare time.
My problem rests with the fact that a country supposedly set on extinguishing prostitution, has its own PM frequenting these women (even if he doesn't have sex with them), bringing them to parties, using drugs...
I mean, that stuff only happens in Washington DC.

Francesca oh Francesca!!!
You don't really believe that Italy is going to stop prostitution...and then she woke up!

Il Duce,The Runt, is totally declasse. (Blast i don't know how to put an accent on the, "e." He makes all Italians look stupid.

#
the embarassement to the country is generated by the vicious italian press, who writes on "non existing" nor grounded cases blown up and echoed around the world by lazy international journalist who just translate wrong words attributed to b...erlusconi's actions.... and by people like you (and you are one of the softer/more tactful ones) who spread out such things and articles offending the premier.
I think that people who spread out disrespectful images like this of a public government figure and especially the chief of a State, so offending him and his country and electors, should be prosecuted.
I would like to state also that no woman (or their parents or anybody) has ever claimed any "zipper" problem on Berlusconi, actually everybody, including the recent Ruby (even if asked 23 different sessions ONLY on her relations with Berlusconi - just to say how the Italian justice is just there to seek whatever to charge him even if not existing), claim they had no sex and he was just the kindest and most generous person, as anybody who has been close to him (male and female, old and young, professional and worker... I met many) claim him to be.

True, we should let him use his own words...

1. As many of your paesani have accurately stated, he is NOT 'Chief of State' although I believe, if not in title but in action he is

2. His own wife (you know, the hot store clerk he had an affair with & dumped his first wife for), claims he has a 'zipper problem' -- and divorced him for frequenting (if not cavorting with) underage girls.

So...? all his words were perfectly right, including "do not read papers anymore". his joke: "better to like beautiful girls than be gay" is typical in italian and harmless and shows no attack to gays... (as gay communities have wrongly and... manipulatively stated). what's the matter? it is anyway a general fact that he and society (especially the majority heterosexual) and nature and good sense prefer men to look at women rather than be gay...(though nobody, including berlusconi, forbids or critics any personal choice and sexual orientation)

He has to remember that flies spread disease, therefore he should keep his shut. ;)

Ahhh...cara mia...When will the day arrive that Italian women like yourself are as vehemently opposed to the subjugation of your own kind as you are about supporting your PM...
No, his jokes are not funny, his tokenism isn't the promotion of women, and no, ogling (if not bedding) underage girls is not better than being gay.

Oh. Sorry. I forgot. We are in a Catholic country, and, while being gay is an abomination, supporting the heads of Church in their pedophile protection program is better than protecting innocent victims as well.
Therefore, it is in fact part of the 'cultural identity' to have sex with underage people but never ever admit to being gay.

And, Whether the press is or isn't inflating things, is not the issue. Berlusconi is a disgrace and while a public figure should keep it in his pants and his trap shut.

darling, he keeps everything at home, his private life. what do you mind about his business? keep respect for him as the premier elected by large majority of a democratic country, and stop the "catholic country" refrain and "church pedophile" political brand as you have lived long enough in this country to know how the american perspective on catholic matters is far from true and too intelligent not to see the manipulation behind the pedophile cases...

Didn't he say, "better to like women than to be gay". I say it's better to be gay than a pedophile.

Manipulation is probably the perfect word for abuse by Catholic priests! Far from being an American perspective, apparently people in Kenya, Philippines, Austria, Belgium, Croatia, Czech Republic, France, Germany, Ireland, Italy, Malta, Net...herlands, Norway, Poland, Slovenia, Sweden, Great Britain, Canada, Mexico, United States, Australia, New Zealand, Argentina, Brazil, Chile and Peru don't like being touched by dirty old men. And while the statistic could probably be applied to any profession, the fact that the Church is supposed to be the place that people turn to for moral guidance and trust, and the fact that senior management (Archdiocese and Popes) turned a blind eye to it makes it all the more abominable. And...What's up with Berlusconi's 'hair'?

I would add to that...that if it weren't for America's Catholics contributing to the funds the church would have died a long time ago...I'm sure our Christian Taliban would really like to see it go.
In case you forgot, Italy is NOT a country which abides by the dictates of the church - I refer to birth rates...among other sins (oops - back to Berlusconi "family man") - sorry.

But, if you (or he) wants to be respected in/out of the press and in/out of the country, it needs to start with him -- "Conduct of a Statesman" "Statesmanlike Conduct". I never heard Thatcher or Merkl making penis jokes.