I recently toured the newly renovated Galileo Museum in Florence.  It contains a vast assortment of gorgeous instruments used and collected during the times of the Medici and more. And, if you’re into that kind of thing, you'll also find a sort of reliquary containing Galileo’s very finger - you know, the one used to point out the sun - and upon closer inspection, even his teeth (which he may have wanted to use to bite his persecutors). But what I found really cool was outside the museum, a very neat sculpture with a type of modernized Gnomon stretching out from it.

And beneath it, a compass revealing the winds of time…really.  Up ‘til now, I had no idea that those myriad mutterings of my great-Aunt on a windy day were actually something quite more scientific than old wives’ tales.
On days she couldn’t get out of bed, she would hazily remark, “This is all due to the Tramontana” (a north wind).  Warm gusts would be greeted with the title “Scirocco”, one of my favorite words in the Italian language. 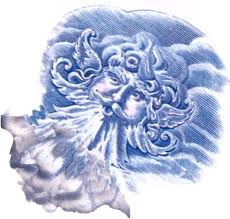 I never heard her actually speak of the Southern winds, the Austro or Libecano, but maybe that’s because she was rarely in Rome in summer.  Although I’m no expert, I’m sure it's those same winds coming from the Sahara that regularly dump sand on my car in summer.  The Western winds are called the Ponente.  But, it is always the dreaded chilly Maestrale (or Mistral) invading from France that shakes one’s soul—and that keeps more than old aunts from getting out of bed in the morning.
The only one not mentioned was Trieste's Bora - that same wind that blankets cars & boats in ice. [There's even a Bora Museum in Trieste - so significant this wind is in the cultural makeup of the city].
All I know is that, the deeper you dig, the more scientific explanations one finds behind perfect common knowledge--Leading one to draw the conclusion that it may just be the bloggers that are full of hot air.