My friend Carol is always scoping the news to come up with an eclectic mix of fun, strange and otherwise obtuse comments around the globe that have to do with Italy.  They are so delicious that I am embarrassed that I've kept her findings all to myself. So, every so often when something truly rich comes along, I thought I'd repost here for all to see.  So, watch this space as we bring you the best of the antics of my paesani as seen from abroad (or rather, from a broad...).

"Now I know why Venice is sinking—it is under the weight of Silvio Berlusconi's giant balls." So said Jon Stewart at the beginning of tonight's Daily Show, wherein he detailed the shocking, unrepentant behavior of Italy's Prime Minister.  And, although it's not true that the immunity law passed (thus his current legal battles, boiling up to the surface), it's still a fun piece of reporting.

In other pictures, one terrific sign posted with unusual irony that was brought to light during the protests reads (after the govt passed huge cuts to education & research),

Silvio - If you can get it up, you owe it to RESEARCH! 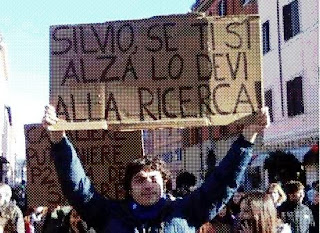 It seems your friend Carol spends (or um, wastes?) a lot of time surfing the net :)

Yay! We get to be flies on the wall for these conversations, or girlfriends in side chairs.

i like your piece! but just to set record straight, i get most (or all??) info/links from cheryl. either on www.twitter.com/italianmeetup or via her postings on driver in italy (on fb)

i don't have time to spend hours surfing online like she does! hahah.

@Carol : I stand corrected, will give Cheryl the Twitter plug next posting.

It's always funny to see both sides of this story. Despite the efforts of groups of women, most Italians seem blase (and morbidly curious) about the whole fiasco. Let's see if legal action has any repercussions.

Hello Ms. Maggi. Longtime fan, first-time commenter. I must send you the Youtube clip with the Irish comic Dylan Moran, who describes Berlusconi as "so twisted, he sleeps on a spiral staircase". I think you'll enjoy it.

Please send me the clip! Although I'll have to look for it now...