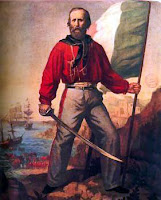 Yesterday, a small miracle took place.  Like the first time someone has a sighting of the Virgin, or sees a statue cry real tears, it usually starts off small.  Word-of-mouth gives the story momentum, the internet makes it explode – until even the authorities have no choice but to take notice.  And so it was, with the Retake Rome initiative, spear-headed in part by an American lawyer, and long-standing Roman, Rebecca Spitzmiller, and the Fondazione Garibaldi; named appropriately after the man who, town by town, made Italy a whole country.

Like all major paradigm shifts, it all started with a small discovery:  that simple oven cleaner will clean off graffiti.  And an oven-cleaner brigade was born.  Yesterday, the group – filled with green-shirted students from the American & International universities and schools - set out to clean the walls of the otherwise stunning Pincio Park in Rome’s Villa Borghese.   And clean they did.  The miracle had grown until even the City authorities sent out a team - on a Sunday no less - to help out in the endeavor.
It was as if Garibaldi’s own red shirt brigade had made it to the walls of Rome – and in its tenacity, united Italy.  Soon, Italians came to ask questions and join forces.  And, talk of making this first halting step toward civic pride part of the school curricula with cleaning field trips perhaps…the miracle may even grow larger.

Combined with the recent ad campaigns detailing the fines for littering and graffiti, we may be at a watershed moment in Italian history.

It was the second time I’d ever seen an actual protest turn into taking actual action ; the first being the activism of Aquila’s homeless residents actually scooping out the detritus from the earthquake themselves.  Up ‘til now, most protests consisted of the obligatory sit-ins on railroad tracks until “the authorities” did something about it.
This, naturally, would transform itself into a few words spoken to the press followed by years of political inertia while whomever had lodged the complaint either lost interest or died waiting for an outcome.  In fact, Italians are not combative.  They will win just by levying a perpetual three-card monty game with you, until you have no choice but to throw in the towel.
Personally, I think the “writers” (I prefer ‘scribblers’ – if you could read something, that might signify actual brain activity) will take all this notoriety as a challenge – and quickly cover up the walls as fast as they were oven-proofed down.
But, no matter, maybe what started out as grassroots can in fact take root.  And, maybe, Italy will be united for the second time in its history.

FANTASTIC piece!! You really captured the spirit of the initiative. Great how you connect so many of the dots between Giuseppe Garibaldi and Retake Rome! Let's just add that this event was only the tip of the iceberg; i.e., that our project involves a whole other realm of civic education that was not brought out yesterday- one of entering into the schools and instilling civic pride in the residents of the world's most beautiful city. To see more about the project, including the guidelines on how kids can enter the contest that is underway to involve students of every age in the ad-campaign for this movement, visit www.fondazionegaribaldi.it under "attività". It's only through an educational, hands-on approach showing kids that taking tags OFF can be LOTS more fun and personally rewarding than putting them ON - that this project will succeed. Otherwise, cleaning a slate for them to re-scribble on would indeed be futile.
The project's inception was educational, and the city is keeping pace with that goal. The Comune di Roma's Coordinamento Politiche della Sicurezza is about to launch two projects to clean graffiti and to meet with students and parents on the them of legality in the schools of the 3rd and 8th municipalities. They want us to help direct these initiatives! The 2d and 7th Municipi have also already asked Retake Rome to help them launch similar initiatives in their schools. What we will need are more adult volunteers who can help meet the growing demand and be available to talk to others and in schools, to scouts, youth groups of every sort about the issues and keep the momentum rolling!
Want to get involved? write us at RetakeRome@aim.com. There's plenty to do...and it's up to us.

Francesca:
A beginning, yes! It's the follow through that counts!

Then there has to be a change in mind set, a profound change, that Il Duce couldn't see and pronounced that ruling Italians was, "useless."

You're asking a lot from a nation that starts almost every sentence with, "Allora" or if you speak Dantesque, "Dunque."

How do you get Italians in four Regioni to throw off the yoke of Sicilian Mafia,the Neapolitan Camorra,the Calabrian 'Ndrangheta and the Puglian Sacra Corona Unita, especially after they assassinate two heroic judges?

Then really branch out and kill the influence all these groups have a the State and Federal levels as well as the rest of Europe.

Any plans of have this coincide with Earth Day? How do Italians participate in Earth Day? I don't remember anything special when I was there.

This is good news.