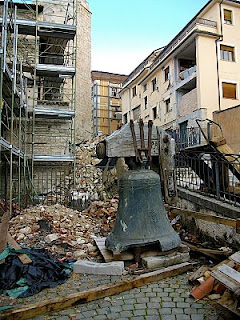 Seeing that February is cut short this year (and I don't get a birthday), I decided this month to skip my Tante Belle Cose -- even though some nice things happened this month -- women running for office, my receiving a check for overpayment from the ACEA electric company (after 6 months), and, the best news, they took down the second ugliest sculpture ever to be made by human (in)genius - right out of my nearby piazza.

So here were are, still reeling from Haiti when now we have Chile.  But then, I get periodic updates from fan Joshua whose family lost their home in Aquila one year ago; and whom, although not homeless in the 'senza tetto' sense of the word, last time I checked, was still living in a hotel in Pescara.

Joshua has provided photo documentation from the last three Sundays of February in L'Aquila. Last week, about a thousand ex-residents tied their old house keys to the fencing as a sign of protest given the complete inertia since the earth stopped shaking there.  The residents then "invaded" the Red Zone -- in the only fraction of the beautiful old city center which can be visited without fire fighter escort.
This past Sunday, Joshua writes,


"We were about 6000, and took part in cleaning up a small fraction of the millions of tons of debris. After almost 11 months, the government bodies have still not decided where to put and process even the smallest portion of the mllions of tons of debris that will have to be cleared away to permit rebuilding.
We know it will take years, but we want to keep an eye on things, we don't want to lose precious time, and above all, we want the city to live again, with us in it, meter by meter, yard by yard."

It may not be a Leap Year but, considering people in Italy's south are still living in metal boxes umpteen years after their own natural catastrophe, let's not skip over the Abruzzesi earthquake survivors.  How long will it take to rebuild their fair city?

Click here for the link and you can also find Joshua and all things Aquila on facebook.

p.s. the scaffolding and such that you will see is only to keep the buildings from falling down, not bringing them up.

Francesca:
What calender are you using? And what's with your birthday?

Today's update on Sunday's 'Citizen's Debris Removal':
The now-disgraced head of the Protezione Civile - National Corp, says "clean up would take 5 years" but he also said, "It wasn't in our job description."
At that rate, it would take far longer than five...
Bravissimi to all the cittadini for taking things into their own hands!!!

"Thanks for passing on the word and the photos. We are no longer in a hotel, but in a temporary apartment, so life is almost normal. But we want to move back, not just because we still work in L'Aquila but the 100km commute is tiring."