Lying through their teeth

This election season will be remembered as the year in which politicians and photographers finally figured out that floating heads on stark white backgrounds didn’t quite transmit a message of any kind – let alone the banal slogans floating nearby.   Most of the time, it was like looking at movie posters of ‘Night of the Living Dead’.
Bonino last campaign season... 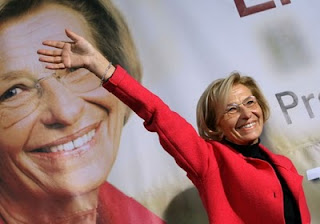 And in this year's "In Bonino We Trust" campaign - 2010
And so, we are finally treated to dark backgrounds, 3/4 portraits, smiles, and we are all the better for it.  After all, if you have to look at someone’s oversized grins 6493 times per day, they might as well make them worth looking at.

But, the posters have now themselves become a battleground – and not just of campaign slogans.  Turns out, those politicians whose chops grin at us like Sylvester the Cat, are the ones who’ve actually swallowed the truth - just like Tweety bird – they post illegally.

And so, weary citizens have taken Berlusconi’s decree of setting up vigilante committees, and decided to take matters in their own hands.

First, by knocking down the actual illegal signs that should never have been put up in the first place (too large, too near intersections, etc). And now, teams are going out and either ripping down the illegal eye & environment-polluting symbols, or covering them up entirely.  Armed with the slogan, “They pollute, we polish” (my verbiage in a marketing-challenged country) - “Loro sporcano, noi puliamo!” (wow – really hits it out of the park…), they’ve set out to call out politicians’ lies and abuse of powers -- before they even get elected. 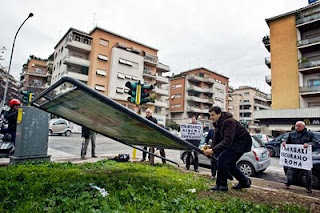 And, it looks like the law (and thinning city coffers) might just be on their side.  I’m all for vigilanteism, especially when it means a cleaner city – and so, the Italians’ newfound activism has one fan from this blogger.

Now, if we could just clean up the slogans, we'd really be beautifying the cityscape.

Are these vigilantes knocking down all illegal signs, or just those of their candidate's opponents?

Thanks for commenting on my blog--good luck with your "Bottom" project!

Compliments for your really interesting blog.

Have a nice day

Meanwhile, today, a car with illegal posters was parked in the bus lane, while the occupants were busy postering away.
20m ahead of them, was an official car with an official something or other, also parked. Ripping them down.
Incredible.