Not that I'm truly an arbiter of good taste, but some things are so ugly, you sometimes wish a worldwide war would ensue just so they can be melted down for bullets.  Since people were asking me to post the pictures of the biggest eyesores ever created, here goes:

This monstrosity (and a few of its facsimiles around Rome) is my pick for the second-ugliest sculpture ever created.  It was done by Luigi Gheno, an artist from Veneto who, before coming to Rome to teach art, had obviously missed the flow and grace of Venetian artists such as Tiepolo who preceded him.  Why a non-Roman garnered so much exposure around Rome is beyond me. He may have 'gifted' his artworks to the City after he realized no one would ever pay actual money for them.
The show of his work in my humble neighborhood was installed in 2001 and to last four months.  Nine years later, during the current campaign to beautify Piazza dei Navigatori, it's been uprooted.  Hopefully, never to spoil the eternal city again.  [Update: Alas, I spoke far too soon.  The wooden version was uprooted so they could implant a humongous concrete base to hold the bronze version for eternity.  I only pray that a tractor-trailor hits it one day and puts us all out of our sheer misery.] 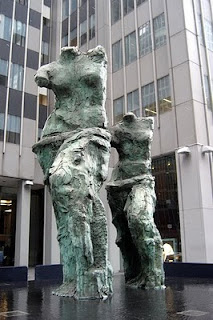 This, instead, garners first place in my triumvirate of 'terribile'.  It's a lime green pair of armless Venus' tiptoeing through the tulips (or are they wading through sewage spill?) along New York City's Sixth Avenue.  The picture is one of a series of outstanding photos posted by wallyg on flckr (whose shots work wonders - they almost appear viewable) and who also provides an excellent commentary on them.  He states that these 'oversized figures' (to put it mildly), were done by "artist"  (quotations mine) Jim Dine, and, despite being headless, they're "Looking Toward the Avenue."  It's unfortunate to note that they're a permanent installation in front of the Calyon Building, but maybe one day, they'll be uprooted like Gheno's during a beautification campaign along Sixth Avenue.

And, to round it off, just because three's company, here's my third choice of ugliest statues ever created: 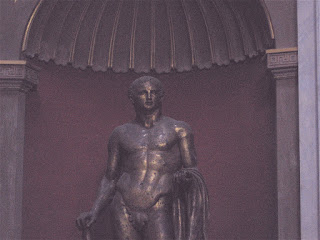 This is found in the sumptuous rotonda room at the Vatican Museums.  It is supposedly of Hercules, but with that stance and that chin, you'd think he was the Dowager Queen of Greenwich Village.  It's no wonder he liked fur coats and carried a walking stick...Now, if he just donned those robes and threw on a Tiara and red leather Prada shoes, I think he looks like a totally buff version of Pope Benedict XVI.

compare it for yourself (!)

Francesca:
Yeah, they're all pretty ugly. You seem to have a thing about the Pope... what is it with you?

You bring up my favourite frescoist and sculptor Giovanni Battista Tiepolo. His most famous piece is that of the Four Continents on the ceiling over the famous Treppenhaus in Wuertzburg's Neuer Residenz. It was designed by two Prince-Bishop brothers, Johann Philipp Franz and Freidrich Karl von Schoenborn between 1720 & 44. You should Google it.

Hey, I live in Rome! But look closely at his face...I think there is a stark resemblance, and I thought that even before he became Pope!

Cherrye at My Bella Vita said...

@Cherrye -- I don't know...I'd feel sorrier for the artists! How that work ended up in the Vatican collection is beyond me -- probably, because it's in perfect condition. Just the proportions are all off.

Anyway, I need to amend my remark about beautifying Rome...turns out, they're making way for more ugly Advertising signs everywhere you look!

Geez, how do these ones end up being displayed so prominantly?