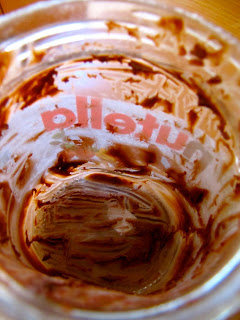 When I was growing up in the food-friendly, marketing savvy USA, field trips weren't always made to cultural sites [although, the Henry Ford Museum & The Stratford Festival were part of the programming, as was a concert in Chicago of - Engelbert Humperdinck no less -- it was the height of Motown, bordering on Bob Segar's Rock&Roll & Patty Smith, so you can imagine how thrilled a bunch of teens were about that choice of venue...] Some of my earliest memories were class trips taken to Detroit's Wonderbread Factory, the Vernor's Ginger Ale factory and even to Stroh's Brewery where we were served up helpings of ice cream, not beer (although the adults could imbibe - even those on the job!)  Companies made sure we were given copious helpings of whatever it was they happened to be making that day.  And it worked.  We were hooked (and anyone who knows me will know that I will walk to all ends of the earth for a cool glass of ginger ale, which one can find in Italy, if you just put your mind to it).
So I was somewhat surprised when, on the World Nutella Day facebook page, two fellow bloggers & Nutella aficionados had posted this picture of their factory visit along with this caption below: 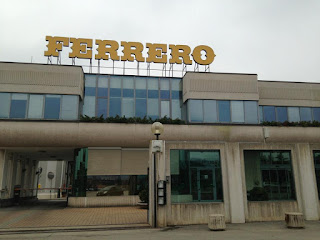 Guess where we are? Ferrero's factory in Alba, Italy.
Unfortunately, it's not open to the public--no Nutella tasting on site!

Anyone who follows my blog will know that one of my favorite mantras of Life in Italy is that the entire country needs a crash course in Marketing101.  Here we have one of the most successful companies on Planet Earth, and...no kiddie visits, no free samples, no glorious Benvenuti! from the likes of Guglielmo Wonka.  If I were a marketing consultant, I would send the entire staff on a field trip over to Hershey, Pennsylvania--rollercoaster park and all--but then again, given their global success, perhaps Ferrero really doesn't need the hassle.
Well, this became quite true when founders of the (unpaid) no. 1 Fan Club and probably most successful food fan club at that, having proudly established a worldwide phenomenon of World Nutella Day, were given 30 days to cease & desist.  Basically, seal it up like a heavy glass jar and, leave our brand alone, Grazie (or no Grazie as the case may be).
I cannot, for the life of me, get my head around what a short-sighted and unbelievably stupid move this has been for one great conglomerate.  You want to shut down people who freely profess their love of your product, and all the while for free?  To do what?  Give it to an ad agency who will charge you millions to produce the same warm fuzzies?  If this is not a case of sour grapes, I don't know what is.
It reminded me of the guy who made incredibly sturdy and recyclable furniture out of Fedex boxes.  He, too, was told in no uncertain terms to box it up.  A smart marketing exec over at UPS immediately offered him as many cartons as he'd like to keep production going strong.  Lego™, in an effort to protect their brand, just allowed the Rest of the World to dilute it by forcing them to call the Lego's, 'Bricks'.
But World Nutella Day is not a moniker, like Kleenex™ or Xerox™.  It's an event.  Did I mention a 'free' one at that?  And one that no one involved was making any money out of, besides?  Simply put, it was a fun-filled, deliciously chocolately experience.  So you shut them down 'cuz it's too popular?
It's no wonder I'm not a beer drinker. Not given the samples when we were youngsters, I never got truly hooked (save for during my college years, which I can't truly comment on, because I don't remember a thing).  As for Nutella™, once you come out of your sugar-induced stupor, perhaps you can tell us what's really behind all this.  In the meantime, I can't wait to see you in Business School marketing textbooks as a case history on 'what went wrong' - right up there with the change of recipe of Classic Coke, or Perrier's botched response to the chemical scare back in the 1980s.
In the meantime, for all you Nutella Lovers out there, I propose a boycott.  And, to help you along, here's a wonderful little recipe on how to make your very own chocolate spread delight.  You can even freeze it in ice cube trays and make your very own little Lego Blocks errr...Not Nutella Bricks.
http://www.edamam.com/recipe/homemade-nutella-recipe-a646122aef54636bbe135d5f689bc488/nutella

We’ve been experiencing a cool spring, with temperatures this week barely creeping over the ‘60s. But to judge by the kids going to and from the school yards, well, you’d think that the ice age was upon us. Those kids are so wrapped up, they look like mini-replicas of the Michelin Man.
Here in Rome, you can always spot the foreigners a mile away. In November and March,  the Germans run around in their shorts and sandals (with socks). The Americans, not much better (they even wear shorts on the plane, while I'm seated, fretfully wrapped up in three blankets under my winter coat, scarf and hat). My sister’s kids, on a chilly April day were running around Cortona as if they were on the beach in August. Needless to say, I had on a hat, coat and scarf.
They actually stopped traffic.
People thought they must be misguided street urchins, and I spent the day fearful someone would call the authorities to pick them up off the streets & rush them into foster care. Upon seeing I somehow spoke the natives' tongue, however, it opened up a whole slew of comments -- mostly on how cold the kids must be (they weren't). One mother (and I am not making this up), whose child was actually wearing a hooded parka, leggings and mittens, ushered her kid away from the playground as fast as his thunder thighs could take him, as if the very idea of liberty might be contagious. The little boy took one last desperate look at these alien children, footloose and fancy free, as he waddled away in his winter wraps, probably into a heated vehicle.
But, what I can’t figure out is that while le mamme are deathly afraid of their kids ‘catching cold’, they’re even more paranoid about kids' sweating – and ultimately caving in from an attack of consumption. In what is seriously a case of mass denial, the mammas look on fondly at their little rosy-faced bundles of joy (bundle being the operative word here). Except it's not the cool air which gives them their cherub-like appearance, but the fact that they are actually roasting underneath their handknit sweaters & down coats. Alas, they're protected by the ubiquitous undershirts, right out of a 1940s neorealism flick. Probably coated with the Italian version of Vick's Vapor Rub besides.
And so it seems, even with the arrival of new generations of mammas & bambini, it is still the calendar which dictates the dress code. And that explains why you’ll only find crazy foreigners seated in the outdoor cafès on a sunny December day.

Guess who lives in Italy? 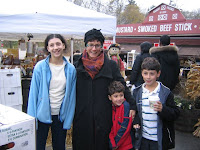