The Costa Concordia Pulls an All Nighter


As the Concordia was pulled into the Genovese harbour, its former Captain was caught living it up an a White Party on the island of Ischia.  Obviously, his supposed tethers for In House arrest can cross bodies of water, just like the ones that hoisted the Concordia up the coast.
For my satirical view of the events...please check out my post on Irreverent Italy.

The boat is docked right at the edge of - repeat after me:  Genova.  NOT Genoa where it will be broken down at the very place it was first made.  And, while you're at it...Torino not Turin and Firenze not Florence and Venezia not Venice...!

A few sad stats about Schettino's horrible act of bravado to impress his on-board - and illegal - squeeze who escaped the tragedy by taxi (!) which is why our Captain Coward found himself abandoning his ship to begin with.

Berlusconi - A report card on his trials & tribulations

School may be out for the summer, but I thought I'd give you a Report Card on the judiciary woes that have our favorite Prime Minister currently "working" (albeit only a few hours a week) at a Senior Citizen Home as retribution for one of his many prickly peccadillos.
Just in case anyone wants to keep track: 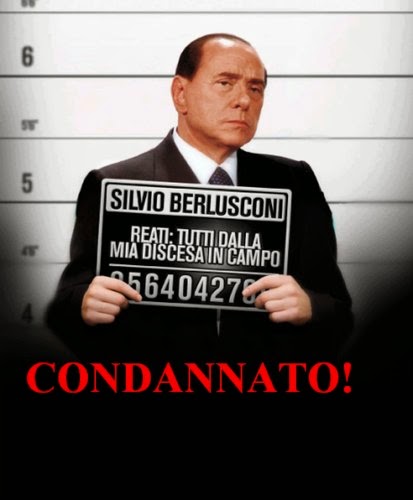 1 - Found GUILTY for the Mediaset Tax Fraud case, in which he was sentenced to 4 years in prison, later reduced to 1 year for a law to reduce jail overcrowding, reduced to community service since he is now over 70 years old.
He was also banned from public office for 5 years, but has managed to get that 'under review' as well.
1 - ABSOLVED due to his party changing the law so it would no longer be illegal
2 - Cases DROPPED due to a govt amnesty (surprise, surprise)
3 - Cases DROPPED - usually for statute of limitations.  To many, this is nothing short of incredible. In Italian trials, the clock keeps ticking even once you're on trial, so...your smooth lawyers can stall and stall and Whoa, really?! I'm off because we didn't try my case in time? Funny how that works.
7 - Cases going to TRIAL

So, where does the "most persecuted man in history" stand on his many trials today?


* A terrific synopsis by the BBC on these cases here
You can find more on my favorite Italian, at The Silvio Show here
No comments:

Longtime readers of my blog will know that I have a few select memes regarding Life in Italy - one of them being, that the entire country needs a crash course in Marketing 101. Heck-they can even choose one of thousands online and free! And so it was, when I caught the new Rome Termini Train Station ad - website - and marketing program.  But, I'll be fair.  Their website is truly terrific.  Thought out nicely, excellent graphics, and even user-friendly.  So on that front, kudos to you web designers!  One trip over there, and you can see all that Rome's Central Train Station has to offer.
But then there it was...front and center, their cool new moniker. I can't decide if it is tongue-in-cheek like the Brits would do, or if they are totally serious about this.  It reads, literally, "Roma Termini: A place for living."
I imagine that what they mean by this, is in reality, "A place to experience the joys of life" or something along those lines. But, really? Because, when I think...a place for living, the hundreds of people actually living there come to mind.
Here, thanks to a mix of outstanding volunteer associations, our guests at least are treated to breakfast in bed - even better service than most of us get at home. The other association that runs Binario 95 - a place that helps the mentally ill or infirm and locates beds around Rome does incredible work.  But their name?  Europe Consulting. Perfect for a marketing consulting firm in Brussels. Marketing 101 anybody?
2 comments: