It's the Great Pumpkin - Or make that...The Grande Watermelon in Italy! 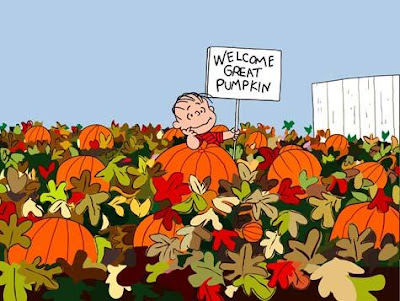 Halloween may have come and gone, but for many of us who want to relish the gorgeous fall weather (even if we can't enjoy the trees changing colors before our eyes - we still have umbrella pines - ha!), it's never too late nor too early to love Peanuts. On a recent trip to Milano I visited the outstanding Comics Museum, or WOW! Spazio Fumetto, worth going off the beaten track just for their bookshop alone. They were hosting an outstanding collection of Peanuts old and new, with amazing interactive tables revealing past cartoon strips and movies, original prints and letters from the inimitable Charles M Schulz, the first "Chuck", as Peppermint Patty would no doubt have had the audacity to call him to his face.
Italians have always loved Peanuts - even producing their own catalog of cartoons, Linus. Not as popular as Topolino (Mickey Mouse & friends), but he's a tough one to beat: I believe it outsells the Bible 'round these parts - with or without our beloved Pope Francis.
So the collection also revolved around Italian lore in the world of the tiny characters. And as the Curator took me through the rooms, I was stunned to learn that the Big Great Watermelon - Il Grande Cocomero as it were - was not a mistake in translation, but actually intentional.
This was disappointing for two reasons: First, because I have long held up the Grande Cocomero as an example of what gets lost in translation...We can only guess what the Bible stories originally held for the masses...When it went from ancient Aramaic, to Ancient Latin, to Ancient Greek and back again before going into Italian then English. I mean, pumpkin to watermelon? I shudder to think of the generations of young children who saw pumpkins here and there, and insisted they were watermelons. To say nothing for the mistaken seasons. I mean, watermelon in November? It reminds me of my college Italian prof - who I am convinced delighted in leading us seriously astray - telling us to always ask for the gabinetto, when we needed to go to the loo. Turns out, I asked many a hostess if I could use her outhouse until some good samaritan finally corrected me on that account.
Secondly, the translators actually chose it - because they wanted a masculine version of Babbo Natale, or Santy Clause...and thus they sneered at the Grande Zucca (feminine). They felt they had to come up with a macho veggie that grew in patches in the great outdoors. I find this explanation quite ridiculous. First and foremost, for the visual cue that is hiding in plain sight, much like the Great Pumpkin himself. Green watermelons / orange pumpkins, but hey, who can tell? But I'm irked by the fact that Italians, much earlier and more prominent than ol' jolly-faced St Nick, an import, have always celebrated their own gift-giving lady...La Befana. Clearly they could have made the Zucca a Zucca and everyone would have been the wiser.
Anyone who follows my blog or Twitter account knows that I am relentless in sticking up for the invisible women of Italy. Our society chooses to ignore them unless of course it's mealtime (Master Chef excepted) or when they feel amorous, or worse, like killing someone.
So, just like Linus learned...an invisible force of women...is much like the Great Pumpkin: Everyone says you don't exist...but I believe in you. So to the publishers in 2015, I would say, bring us the Grande Zucca once and for all.
2 comments:

This Thanksgiving, I bring my annual tradition of posting one of my earliest entries on celebrating this very American tradition as an expat...Today, or more likely, over the weekend, people are breaking bread (well, actually stuffing) with their native friends and many foreign faces as well. So, wherever you are, enjoy your own Festa di Ringraziamento!

Thanksgiving is my favorite holiday. And it's something that we American 'expats' celebrate pretty much the world over in our adopted countries. In much the same way that Italy (and Europe, for that matter) have adopted Halloween as their own, in industrious Milan or Geneva or London, store owners start stocking up when Thanksgiving comes around the corner. It's become so popular, you now need to order the bird in advance. Those same stores stock their shelves with many items that ordinary Italians would probably have fed to their pigs if they had them.

Although Italians eat lots of turkey, they seriously don't eat - much less prepare - the 12-15kg version –whole. But right around the last week of November, you can ask your butcher to purchase - and then hold onto - the entire bird. And this is terrific. Aside from providing the butchers and cashiers a bit of holiday entertainment, you (along with your bird) become the center of attention. One year, they were so confused by our request, a friend ended up with an 11kg bird for the price of one kilo: €3.95. Even after questioning the amount, they insisted the price was right...Let's just say, given the cost of things in Italy (and a bird that size would have run upwards of €60), we had lots to be thankful for that year!

Surprisingly, Thanksgiving in Italy brings one lots closer to the original Thanksgiving feast. First, there's the shipping of all the canned foodstuffs, probably not unlike the stuff our forefathers brought in huge wooden crates to and from the New World. Americans start filling up empty suitcases with goodies like cans of pumpkin and cranberry, Stovetop stuffing mix, and packs of Jiffy cornbread (because polenta just doesn't do the trick).

But with a nod to those original pilgrims, I must say, it's the turkey that is the star of the show. While we don't have to quite break its neck and clean out its gizzards (although, if you forget to request it, you might just end up with the whole thing, head and all), we all get a bit tripped up by something never quite seen in an American home – all those feathers. Or, feather tips, rather.
In the USA, when you pick up a turkey, you generally wind up with something very remotely resembling the animal from whence it came. In Italy, you're reminded that this was, in actual fact, a bird – feathers and all. And so, you learn how, exactly, one rids oneself (or one's turkey) of his down without actually peeling the whole skin off, feather tips and all. I can just imagine those early pilgrims trying to figure this one out: with Native Americans furious that their guests were trying to trim away the feathers along with the tasty (and fatty) skin. No wonder so many died of hunger. To get it right and ignoring old traditions of plucking, you find your best gas-powered flame thrower, and start torching the turkey feathers away.

Unfortunately, no matter how long you painstakingly go about de-feathering, there are always a few tough ones left over – kind of like those grey hairs you try so hard to dye. And, while I must say, this process does not make me nostalgic for the huge butterball turkeys with a self-popping thermometer inside, it does add a bit to your preparation time.

Once your table is set for a feast, there's another key issue to handle in serving your feast to your Italian paesani. And that is, contrary to popular belief, Italians do not actually feast. That's especially the case given a non-Catholic holiday, and in the evening in particular. So, your fully expected annual pigging out fête sort of falls a bit flat; with each Italian guest carefully choosing their primo (mashed potatoes & stuffing), secondo (turkey), and contorno (veggies) while questioning why one must eat 'family style' and not one dish at a time. They barely fill their plates and skip second helpings. Stuffing is seen as an alien life form and desserts, well, whoever heard of a dessert made from a vegetable?

So, while the rest of us heap up our plates again and again, and then start loosening our belt buckles, well, judging by our girths, we can see why Thanksgiving is a wholly American phenomenon.
11 comments: